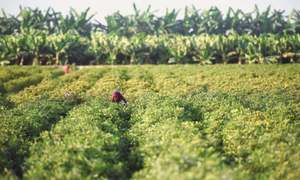 LAHORE: The Pakistan Tehreek-i-Insaf’s Punjab government on Wednesday launched its agriculture policy to “enhance economic growth and raise standards of living of the masses, particularly the rural people”.

Unveiling the policy, Minister for Agriculture Malik Nauman Langrial claimed that all stakeholders, chairmen of agriculture-related task forces as well as USAID experts were consulted during the formation of the policy.

He said the participation of the private sector in investment, better management and promotion of mechanisation were the hallmarks of the policy.

Rural women and youth would be offered incentives under the policy for encouraging their active role in the productivity process, he added.

Mr Langrial said with an objective of giving targeted subsidies, the government would offer subsidy in the form of cash transfer, direct to the farmers.

He said farm marketing would also be modernised, while the growers’ interests would be protected through climate-smart agriculture and crop insurance.

He hoped the measures would lead to 4 to 5 percent growth rate in the agriculture sector.

Mr Bakht assured provision of financial resources to achieve the targets set in the agriculture policy.

Mr Leghari lamented that centuries-old irrigation system was being still followed in the country and called for improving it as per international standards.

He appealed both to the rural and urban water consumers to judiciously use the precious natural resource.

Mr Gardezi urged the government to at least follow the neighbouring India to promote agriculture here.

He said the same agriculture policy was launched in 2014 but it was never implemented.

He regretted that agriculture varsities were functioning in the absence of vice-chancellors and urged the government to fill the vacancies at the earliest.

Meanwhile, the agriculture minister has directed his department to resolve on priority basis the complaints being received on PM’s Citizen Portal and asked the agriculture secretary to appoint a focal person in this respect.