IHC declines to entertain plea against broadcast ban on absconders 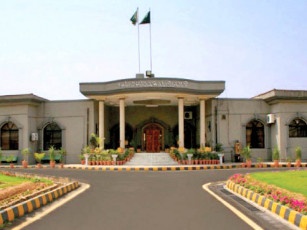 ISLAMABAD: The Islamabad High Court (IHC) on Thursday declined to entertain a petition for regular hearing that sought permission to broadcast the coverage of proclaimed offenders and absconders.

The court suggested to the counsel to seek instructions from the petitioners and argue the case again on Dec 16.

Minutes before the hearing of the petition, Nasim Zehra disassociated herself form the petition. She tweeted that problems related to Pakistan media were enormous while the focus of the petition was too narrow. Later, senior journalists and analysts Zahid Hussain and Asma Shirazi also withdrew their names from the list of petitioners.

The petition challenged an order of Pakistan Electronic Media Regulatory Authority (Pemra) issued on Oct 1, 2020, and a directive dated May 25, 2019, barring the broadcast and repeat broadcast of speeches, interviews and public addresses by proclaimed offenders and absconders.

During the course of hearing on Thursday, IHC Chief Justice Athar Minallah raised multiple questions about maintainability of the petition.

A person loses certain rights after he is declared a proclaimed offender, chief justice observes

The chief justice said an aggrieved party could only file representation before Pemra within the stipulated timeframe, adding the deadline for filing such an appeal had also lapsed.

“Not a single person has ever filed an appeal before Pemra against the directive, it means that no one was aggrieved with the directive,” he remarked.

Without naming anyone, the chief justice remarked that apparently two persons had affected by the Pemra directives.

Mr Raja argued that there were hundreds of absconders and it was not a matter of two persons only.

He told the court that the petitioners wanted free flow of information and its dissemination to the public at large as provided under Article 19 of the Constitution.

Justice Minallah pointed out that Article 19 ensures freedom of expression but a person loses certain rights after they are declared a proclaimed offender. The absconder loses the right of citizenship, and sometimes his computerized national identity card and passport are also blocked by the government.

The counsel reiterated that he was not talking about a single person.

Justice Minallah replied that the petition was not simple since not a single absconder had ever approached the authority. Television channels discuss absconders, the ban is only for giving them airtime, he added.

Mr Raja argued that Pemra’s directives were for journalists and media persons, therefore, they were also aggrieved parties in this matter.

Justice Minallah remarked that this would be a test case for the judicial system.

“Do you think relief would be extended to all the absconders and proclaimed offenders,” adding it is not in the public interest to give relief to an absconder.

He observed that freedom of expression is of paramount importance but this is an altogether different scenario. This petition would give a blanket relief to all absconders which this court would never desired to do.

Justice Minallah said the government had allowed an absconder to travel abroad and was now blaming the judiciary for letting him go.

The court adjourned further hearing of the matter to Dec 16.The petition contended that the Pemra order was “unconstitutional and illegal. Prohibitions have been imposed on electronic media of Pakistan with respect to the dissemination of information. This prohibition is a constitutional wrong in its own right and amounts to nullifying the rights made available under Article 19 of the constitution.”

According to the petition, it is the right of the petitioners and of the print and electronic media in general to express, publish, disseminate, relay and broadcast views and words of any person, including a convict, proclaimed offender or an absconder.

It requested the court to declare the Pemra directives illegal.