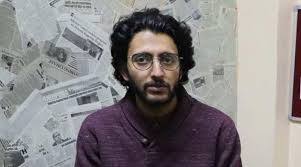 RAWALPINDI: A journalist from Indian Occupied Jammu and Kashmir (IOJK) has been nominated for the 2020 RSF Press Freedom Awards.

Reporters Without Borders (RSF) have issued a list of 12 journalists and media outlets from 12 countries who have been nominated for the awards, to be awarded in Taipei on December 8, says an RSF statement.

Editor of the main investigative website ‘The Kashmir Walla,’ Fahad Shah is regularly summoned for questioning by the police about his reports in order to intimidate and threaten him, but also to try to force him to reveal his sources, which he refuses to do under any circumstances.

Fahad Shah has also been the target of physical assaults. The outlet that he runs has played an important part in defending press freedom, using innovative methods to keep 8 million Kashmiris informed despite the fact that they have been cut off from the outside world since the IOJK’s autonomy was rescinded in August 2019.

Seven journalists – four of them women – and five media outlets (or journalists’ organizations) are competing in three categories; prize for Courage, Impact and Independence. They include journalists or investigative media from Russia, Brazil, Philippines, India and France.