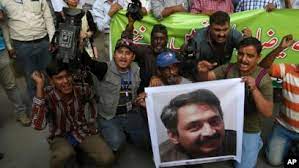 At least 42 journalists have been murdered in the line of duty in Pakistan during the past four years, according to government data shared during a Senate session. This is a concerning figure, simply because journalists should not need to put their lives at risk to perform a public service — disseminating information and speaking truth to power. Meanwhile, some senators were quick to note that the figures seemed to be lower than what regional sources suggest. Balochistan Awami Party Senator Danesh Kumar said at least 10 journalists had been murdered in the province, rather than the three listed in the government data.

But even this lower death toll becomes more upsetting when we realise that most of the perpetrators never face punishments for their actions. Of the 15 murdered journalists from Punjab, cases of only seven have seen suspects arrested, and of those, only five have made it to trial. In the other eight, the suspects remain on the run, while in one case, the accused was released by a court. Meanwhile, only four arrests have been made

In the 11 killings recorded in Sindh. The numbers from Khyber-Pakhtunkhwa are also disappointing, with only four suspects facing trial, despite 13 journalists having been killed, while in Balochistan, two suspects had “escaped”, one was under trial, and one had been sentenced for three separate killings.

But few observers have been surprised by the extent of the state’s failure to deliver justice for these journalists and their families. A Freedom Network report last October noted that only two of the 53 journalists killed in Pakistan from 2012 to 2022, according to its data, had gotten justice through convictions of their killers. In many of the remaining 96% of cases, several murders were not even properly investigated, with no suspects being named in at least 15 cases, and many FIRs being slow-rolled by the police. Delayed registration of an FIR is the surest way to allow evidence to be destroyed and for suspects to walk free. Unfortunately, the evidence suggests that is the point.