An emblem of prudence 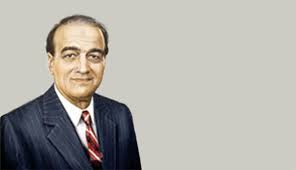 In their book ‘The Elements of Journalism What News people Should Know and the Public Should Expect’, acclaimed journalists Bill Kovach and Tom Rosenstiel write, “Journalism’s first obligation is to the truth, its first loyalty is to citizens and its essence is a discipline of verification.” Founder of the Jang Group of Newspapers, Mir Khalil-ul-Rahman embodied these traits, being the torchbearer of the most exemplary journalism.

Mir Khalil-ul-Rahman always put the truth above everything else. Throughout Zia-ul-Haq’s regime of extreme media censorship and Ayub Khan’s stringent media control via the Press and Publication Ordinance, Mir Saheb, as the head of such a large media group, was in the spotlight. Hence he had to bear the brunt of the burden of political pressure. Despite all the threats to journalists during those times, he continued to publish objective, honest news, showcasing all sides of a matter without prejudice. Throughout his career, he maintained a strong impartial policy when it came to politics. Qari Sher Afzal, a leader of Jamiat-i-Ulema-i-Islam said that despite being considered a close friend of Mir Saheb, he was never given undue political favour by Mir in his newspapers. Once on his suggestion that Mir’s sons should contest the election, Mir refused on the ground that, it would make his newspaper controversial due to their political affiliation. This reflects the strength of Mir Saheb’s character, both as a man and as a journalist.

As mentioned earlier, a journalist’s loyalty lies with the citizens of the country. Mir Khalil-ul-Rahman was an avid believer of the ideology of a separate state for Muslims to live in and as such, he contributed a lot to the Pakistan Movement. He declared Jang as the voice of the All-India Muslim League and printed information for Muslims to increase their awareness about their rights and inform them of the independence movement. In fact, after the creation of Pakistan, Quaid-i-Azam himself acknowledged his efforts to support the movement and offered government’s help in running his newspapers – which Mir Saheb refused, out of a need to keep his newspaper independent from political prejudice.

Mir Saheb always made space in his publications for representatives from student and labour unions such as the Pakistan Mazdoor Kissan Party (PMKP) and the National Students Federation (NSF). He would listen to the point of view of clashing student groups and allow them to print their differing perspectives in his newspapers. The President of Arts Council of Pakistan (Karachi), Muhammad Ahmed Shah also mentioned that Mir Saheb would take great interest in the youth of the country and their advancements. In another case, Wajihuddin Ahmed, former Judge of the Supreme Court of Pakistan shared a memory he had of Mir Saheb where he saw him attend a hearing in court despite not even being the defendant, showing how deeply the man cared about social issues within the country. He was loyal to the people of Pakistan to his core and willing to give them a voice for any issue they faced.

Journalism is called the discipline of verification because its intellectual foundation lies on the three core concepts of transparency, humility and originality. Mir Khalil-ul-Rahman had the opportunity to experience the two extreme ends of a career in journalism: from personally selling newspapers on his bicycle to being the biggest newspaper magnate of Pakistan, the man had seen it all. And it was this experience that made him such a master of these core concepts. Despite the massive success and acclaim he accumulated in the later part of his life, all his peers – from bigshot politicians to the cleaners in his office buildings – described him as a very down-to-earth, humble man. He was a great listener and would take advice from anyone, regardless of their position.

Muneer Khokhar, an old employee of Jang, said that Mir Saheb would personally meet staff from every department when he came to visit his offices. As someone who used to manage all aspects of newspaper publication singlehandedly, from editing to printing to distributing, he was directly able to understand all the technical concerns of the staff and provide them with solutions. Furthermore, Mir Saheb kept up with any new developments that took place in the international field of journalism, giving him the chance to introduce a lot of original ideas to Pakistani journalism. He was one of the first to adopt Noori Nastaliq, an Urdu font, to computerise Urdu typesetting. Jang was also the first Pakistani media group to produce multi-colour newspapers.

Mir Khalil-ul-Rahman was basically synonymous with the term of ‘a true journalist’. He was a pioneer of journalism in Pakistan and he embodied the essence of the discipline, becoming a role model and mentor for all others in the field. He helped in founding the Council of Pakistan Newspapers Editors (CPNE), giving Pakistani journalism a strong foundation to stand on.