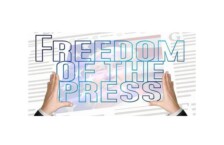 PESHAWAR: The participants of a seminar have demanded of the federal government to legislate for ensuring freedom of press, protection of rights of journalists and financial support to sacked media persons.

The seminar titled ‘Freedom of press and resolution of media crisis’ was arranged by Khyber Union of Journalists at Peshawar Press Club on Wednesday.

They appreciated the role played by journalists for strengthening of democracy in the country and stressed the need for collective efforts by all stakeholders to ensure freedom of the press.

Shaukat Yousufzai urged journalists to forge unity among their ranks to raise collective voice for solution of their problems. He said that political parties after coming into power never paid proper heed to solution of issues of journalists. Lateef Afridi said that journalists always served the people with sincerity. He said that corruption destroyed all of the institutions. He said that media should focus on character building and reformation of the society.

Shahzada Zulfiqar and Nasir Zaidi shared data about the journalists, who laid down their lives in line of duty, and urged political parties to extend support to media workers. They also talked about the problems being faced by the journalists after losing jobs.

They said that government should take effective steps to resolve the financial issues of journalist and children of the slain media workers.

Several resolutions were unanimously adopted on the occasion for the protection of journalists’ rights and freedom of press.