Government has no intention to curb media freedom: PM Shehbaz 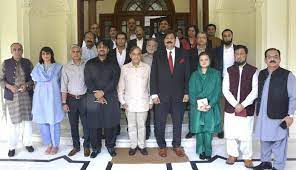 Prime Minister Shehbaz Sharif has said that the government has no intention to put any restrictions on the freedom of media and expression.

The premier made these remarks while speaking to a delegation of the Council of Pakistan Newspapers Editors (CPNE) in Lahore on Sunday.

Speaking about challenges to press freedom in the country, he assured that journalists would be provided with the best possible protection against unwarranted actions under the Pakistan Electronic Crimes Act (PECA) ordinance and other related laws.

He said that the ministry of law had already been tasked to review the said ordinance.

PM Shehbaz added that clauses in the ordinance contrary to freedom of the press will be abolished, and that strict action will be taken against the Federal Investigation Agency (FIA) officer filing an appeal without the government’s approval.

Praising the CPNE role for the freedom of media, strengthening of democracy, and evolution of democratic institutions in the country, the prime minister said that the government is keen to engage constructively with the CPNE and other media representative bodies for the protection of the rights of journalists and promotion of responsible journalism in the country.