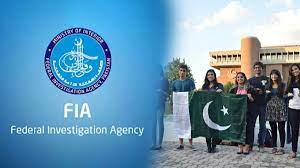 ISLAMABAD: The Federal Investigation Agency (FIA) on Sunday warned the overseas Pakistanis who are allegedly involved in committing offences on the social media that their names can be put on the Exit Control List (ECL) and can be issued red notices through Interpol to arrest them.

According to a press release issued by the FIA: “All the Pakistani expatriates are advised to desist from spreading chaos in Pakistan. Their social media posts must not be offensive and seditious. They must read the Prevention of Electronic Crimes Act 2016 to make sure that their social media posts do not constitute any offence.”

It further said: “If they commit any offence, the red notices through Interpol can be issued to arrest them and their names can be put on the Exit Control List (ECL).”

It advised: “They need to avoid committing any offence on social media, and the advisory is only for offenders. Any attempts by anyone, staying anywhere in the world to create disturbance in Pakistan or to defame dignity of a natural person or to act against modesty of a natural person through fake news or fake videos, are against the laws of Pakistan. Such attempts are punishable under Pakistani laws. The offenders will be prosecuted in Pakistan whenever possible. Hence, anyone must avoid committing any such offences through any media platform.”

As far as the state institutions are concerned, the statement issued by the Inter-Services Public Relations (ISPR) after the 79th Formation Commanders’ Conference, held on April 12, also stated: “The forum took note of the recent propaganda by some quarters to malign the Pakistan Army and create division between the institution and society. The national security of Pakistan is sacrosanct and the Pakistan Army has always stood by the state institutions to guard it and always will do same, without any compromise.”

When former Prime Minister Imran Khan was ousted through a no-trust motion by the opposition parties, hashtags against the state institutions and some key figures remained top trends on the social media platforms. Later, Azhar Mashwani, a top leader of the PTI’s social media team and a former focal person to the Punjab chief minister on digital media, rejected reports that the PTI’s social media team was behind the online campaign against the state institutions. “Our party’s support base comprises millions of people, and we are not responsible for every word they say on the digital media,” he added.

Some quarters have also raised questions about the warning issued by the FIA, stating: “FIA seems to go beyond its statutory mandate. After the judgment of Islamabad High Court (IHC), offence under Section 20 of the PECA 2016 is non cognizable, so how can FIA hurl threat of arrest in a press release. It is tantamount to intimidation of journalists and contempt of court.”

Meanwhile, Federal Investigation Agency (FIA) has initiated an inquiry against anchorperson Sami Ibrahim for allegedly transmitting “anti-state” videos and statements on various social media platforms. The FIA issued a press release on Sunday that accused Ibrahim of being “involved in spreading fake news regarding state institutions”.“He has made imputations which are glaring attempts to incite armed forces personnel to mutiny. He has attempted to create chaos in Pakistan through media while staying abroad,” it added.

Ibrahim is a TV anchor and has interviewed a number of high-profile figures, including former Prime Minister Imran Khan.

The FIA said he would have an opportunity to defend himself in the inquiry which would be closed if he ably defended himself. Otherwise, the press release said, if the offence was made out, then a case would be registered against him and he would be arrested and prosecuted in court.

The press release said that an Interpol red notice would be issued for him since he was abroad and his name would be placed on the Exit Control List (ECL).

The watchdog also issued an attendance notice to the anchor which ordered him to appear at the FIA Cybercrime Reporting Centre in Islamabad on May 13 (Friday) at 11am to record his defence, otherwise it would be assumed that he had nothing to present in his defence and procedure under Section 174 (non-attendance in obedience to an order from public servant) of the Pakistan Penal Code (PPC) would be adopted against him.

The attendance notice mentioned the state as the complainant and said the inquiry was registered on May 6. It said the inquiry was being initiated under Section 20 of the Prevention of Electronic Crimes Act (Peca) 2016, (which had criminalized defamation), read with Section 505 (statement conducing to public mischief) of the PPC. The notice said the anchor had intentionally and publicly shared an alleged video on social media in which “false and frivolous” allegations were made against senior government functionaries.

“Furthermore, you have built a narrative with ill intent to cause intimidation and unrest between government officials/personnel of armed forces and the general public,” it added.

For his part, Ibrahim confirmed on Twitter that a case has been filed against him. He added that he had discussed the matter with his lawyer who had conveyed to the FIA that he was abroad and he would be returning to the country on May 14 (Saturday).

It is pertinent to mention here that the Islamabad High Court (IHC) last month declared the Prevention of Electronic Crimes (Amendment) Ordinance as the Peca-2016’s section 20, which criminalises defamation. The FIA had sought Section 20’s restoration on Saturday by filing a petition before the Supreme Court to challenge the order of the IHC. However, hours later Information Minister Marriyum Aurangzeb announced that the petition stood “withdrawn immediately” after journalists and media bodies expressed serious concern over the move and demanded immediate withdrawal of the petition.

The FIA further cautioned Pakistani-origin expatriates against “spreading chaos” in the country while abroad and warned that their social media posts must not be “offensive or seditious” otherwise action would be pursued against them.