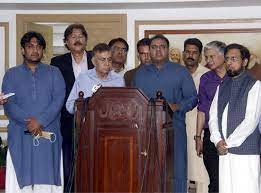 LAHORE: Information Minister Fawad Chaudhry on Saturday assured a delegation of newspaper editors that an authority to regulate the electronic, print and social media would be set up only after taking the input from all stakeholders.

The minister, while speaking to a delegation of the Council of the Newspapers Editors headed by Arif Nizami, clarified that the PTI believed in media freedom.

“All media organisations have been sent the concept paper of the authority which the government plans to set up,” he added.

“Now feedback from media organisations including the CPNE will be sought on it.”

The minister maintained that the ordinance circulating on social media was “fake news” and the government had nothing to do with it.

“This makes it necessary to introduce laws to ensure disinformation was not spread through social media, particularly on YouTube.”

The minister assured the delegation that if objections were raised on the concept paper, the government would not introduce new laws or amend existing ones that would give the impression that media freedom was being curbed.

He added that on the suggestion of the CPNE, all departments would be told to pay their outstanding dues to media organisations.

Fawad directed the Press and Information Department to chalk out a strategy for this purpose.

Nizami told the minister that media and political circles had serious reservations over the setting up of the Pakistan Media Development Authority.

“We want that no steps that undermined press freedom are taken so that the ties between the government and media organisations remain cordial,” he added.

The minister reiterated that the government did not intend to gag the media.

“The government wants better coordination between the Press Council, Pakistan Electronic Regulatory Authority, Audit Bureau of Circulation and the Registrar Office to ensure the rights of media workers.”

Earlier while talking to the media, Fawad reiterated the government’s willingness to negotiate with the opposition.

He added that the Opposition Leader in the National Assembly, PML-N President Shehbaz Sharif, could appoint a focal person for this purpose.

He maintained that the government had already sent Shehbaz an invitation for talks.