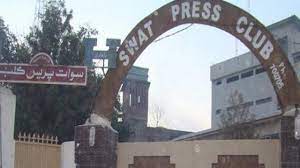 Swat:  More than 40 journalists, including 20 members of the Press Club, have filed a writ petition in the Mingora Bench of the Peshawar High Court against the occupation of Swat Press Club and closing of the club’s doors on working journalists.

Barrister Asadur Rehman, while appealing to a division bench comprising Justice Ishtiaq Ibrahim and Justice Waqar Ahmed, said that these journalists wanted to present their position as a regular party in the Press Club case. He told the apex court that his clients were of the view that the Swat Press Club had been occupied by politicians and the occupation mafia for many years.

He argued that the press club is for the protection of the rights of journalists but it is occupied by people who use not only journalism but also the club for their politics and purposes.

“Membership in the Press Club has been banned for the last eight years while its grant has also been closed for four years due to the ego of these people,” he added.

The members of the club are Saeed-ur-Rehman, Shirinzada, Niaz Ahmad Khan, and Saleem Athar.

After hearing the arguments of Barrister Asad, the esteemed judges expressed astonishment over the plight of the Press Club and approved his request for the hearing, and issued notice to Ghulam Farooq and others to file a reply within two weeks.