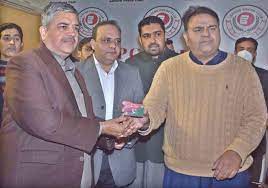 LAHORE: Federal Minister for Information and Broadcasting Fawad Chaudhry inaugurated the issuance of National Health Cards for members of Lahore Press Club (LPC) and distributed health cards at the LPC.

He said soon land would be marked for Phase II and there would be announcement regarding development and issuance of loans for construction of houses on it while IT Lab would be set up in the club.

APP adds: Federal Minister for Information and Broadcasting Fawad Chaudhry said the government was committed to promoting literature, art and culture in the country. Addressing the Grand Books Launch ceremony, held at Quaid-i-Azam Library here on Sunday for launching 16 books written by renowned English poetess Farzana Aqib, he said that the government wanted to put the country on the track where Pakistan could compete the world in literature, art and culture like other sections of life.

He said that unfortunately, Pakistan had been kept behind in literature during the previous regimes. He said that a society would be sick where drama, poetry and literature would not be promoted as all colours of life were linked with poetry, prose, drama and stories.

The minister said that medium of story-telling had been neglected and those experts had been ignored who promoted literature, resulting in decline of poetry and drama in society. He said that state TV was being made an entertainment channel where medium was English and quality dramas, poems and literature would be welcomed on it.

He invited English writers to come forward and share their works so that Pakistan could progress in this field. Earlier, he expressed his joy to join the ceremony as the chief guest and recited some versus of the poetess.