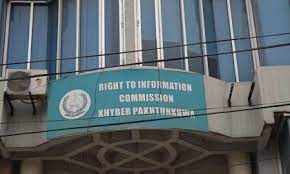 A notification issued by the provincial information secretary stated that the provincial cabinet had approved the recommendation made by the chief minister for the appointment of Mrs Farah Hamid, a former officer of Pakistan Administrative Services (PAS), as chief information commissioner under Rule 20(C) and 24(3)(b) of the KP Rules of Business read with section 24 (3) of the KP Right to Information Act, 2013.

Mrs Hamid has served against different administrative posts in the federal and KP governments and also served as federal secretary higher education and secretary provincial higher education department and industries department. The post had fallen vacant three months ago with the completion of the term of the then incumbent.

The notification provides that Mrs Hamid shall hold the office of the chief information commissioner for a term of three years or reaching the age of 65 years whichever occurred earlier.

Meanwhile, the government has also appointed a former district and session’s judge, Mohammad Asim Imam, and ex-chief engineer of communication and works department, Aamir Durrani, as commissioners for the KP Right to Services Commission.

A notification in this regard was issued by the KP chief secretary on Friday. The two commissioners have been appointed under section 16(2) of the KP Right to Services Act, 2014.