Explainer: Why are journalists opposing the Pakistan Media Development Authority? 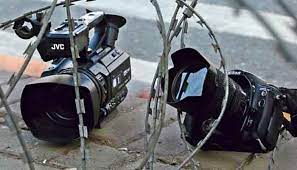 The current minister of information, Fawad Chaudhry, however, is determined to go ahead with the controversial PMDA, which he has also tried to push through in the past but fortunately, failed.

Previously it was called the “Pakistan Media Regulatory Authority”.

Why are journalists against the PMDA?

At a time when Pakistan is facing declining media freedom and freedom of expression for the media is ranked at 145 in the world, the introduction of such laws will further worsen the global image of Pakistan.

The controversial law is ill-conceived on all counts: it proposes to set up all media (print, television, radio, films, social media and digital) control under one body, ignoring the fact that each media format has unique dynamics and characteristics that cannot be governed under one authority.

Print, for instance, is under the provincial domain. With 150 TV channels (still growing), over 300 radio stations, 3,000 print publications, numerous digital and social media platforms, 1,000 cable operators, numerous film production houses, it is practically impossible for one authority to govern them.

It will only breed more inefficiency and will lead to corruption as well as stifling healthy discussion and debate which is a must for a growing democracy. Nowhere in the democratic world does such an example exist. Moreover, individual regulatory bodies that regulate respective media platforms already exist.

Besides this, a regulator must be independent of government control. However, governmental control over the appointment and removal process makes this proposed body another bureaucratic addition.

Moreover, a body headed by a serving grade 21-22 officer of the federal government cannot by any means be considered independent.

In the presence of provisions like “power of federal government to issue directives” of binding nature to such a body make it further subservient to the government.

The information ministry says fake news on social media needs to be addressed at all costs and PMDA is, in part, a response to that genuine need.

For social media and digital platforms, in reference to fake news and hate speech, there are cybercrime and defamation laws, which the government uses when it’s in its own interest.

Moreover, by trying to control YouTube channels, Facebook pages and Instagram accounts, the government will stifle free speech. It is practically impossible to regulate digital mediums. The platforms that these accounts are run from do not have any on ground presence in Pakistan and the platforms are not inclined to remove content that falls under freedom of speech.

Fake news on social media can only be dealt with through strong defamation laws, which is the case throughout the world. Pakistan has cybercrime laws but there is a backlog of cases as well as weak implementation.

Platforms such as Facebook have strong monitoring and if fake news is reported to them, they do remove copyright/fake/videos depicting violence. Their monitoring is strong and efficient and a better use would be to look into how they can aid in controlling fake news.

Additionally, there are available applications that the government can develop and use to monitor if fake news is being posted online. There are a lot of tried and tested avenues but it seems as if with this government the issue is not of law and rules but of control and power. There are a few in the government who want to control through a one-shop stop for vested concentrated power.

The information ministry says that media owners are against PMDA because there is a proposal for Media Tribunals (media courts) that will address issues between workers and media houses, to help workers get his or her rights.

The ministry is trying to divide and conquer by saying that they are setting up tribunals so that their wage interests can be looked after.

Additionally, there are labour courts and other courses of action for the settlement of worker disputes. The Implementation Tribunal for Newspaper Employees (ITNE) exists and so do the NIRC and wage commissioners.

The setting up of media tribunals is not for workers, but a facade. The aim is to bypass high courts and create NAB and anti-terrorism like courts to ‘fix’ journalists and pressure media houses to do the same.

The ministry would like to fast track cases where even the right for appeal doesn’t exist with the High Court, but only the Supreme Court -where there are already huge case backlogs. The aim is to control tribunal individuals which is a lot easier to do than to control and influence High Courts which is the key pillar of the judicial system.

Media tribunals are the most dangerous part of the PMDA.

What are some other practical concerns regarding the PMDA?

The selection procedure for the board governing the PMDA from the private sector includes four stakeholders only when there are at least 12 major stakeholders.

The PMDA board will include 50% government officials and 50% media stakeholders, which is eight in all. How do they plan to get four representatives from at least 12 stakeholders like PBA, APNS, CPNE, AEMEND, PFUJ, cable operators, film producers, digital representatives, and 2-3 different workers bodies?

PMDA also proposes to issue licenses to media outlets which already exist for TV and radio.

PMDA proposes penalties on media houses and journalists up to Rs250 million. It proposes increased government control by appointing bureaucrats at key positions.

The government historically has the biggest conflict of interest and has repeatedly tried to stifle the press so that their own governance and alleged corruption is not highlighted and brought to the public.

The structure of the complaints councils and authority is a replica of the existing PEMRA complaint and authority structure. Why is there a need for a new one? The involvement of so-called independent members is a sham as it already exists but has never been implemented properly due to that conflict of interest.

Regulation is still required. What is the solution for effective media regulation?

Answer: There is no second opinion on the fact that the broadcast sector must be regulated. However, the question remains about what should be regulated.

In principle, regulations must restrict to the following aspects:

Transparency and fairness in allocation and licensing of broadcasting frequencies

Prevention of undue concentration media ownership in the sector

Content regulation or censorship of dissenting voices must not fall in the purview of the regulator. Instead, there is a need to make the existing bodies effective, independent and to effectively implement existing rules and laws.

The existing regulatory bodies should be more neutrally represented by stakeholders and intellectuals and not by government representatives who are under pressure to serve their masters. The chairman and board members should have independence and add credibility to regulatory institutions. Defamation laws should be more efficient.

The answer is definitely not in setting up another supra authority which is bound to breed more corruption and become more inefficient.

So what is the need for the information ministry to push this at this time?

Answer: It seems the Information Ministry has some ambitious people who want to control the media at all costs, for some special projects which may be of a personal nature.

The ministry finally stated that journalist associations are supporting the draft. Each time, the ministry was proven wrong.