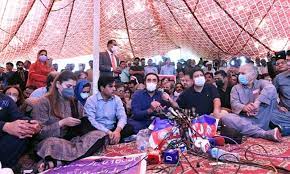 Political parties, student unions and members of civil society continued to express solidarity with protesting journalists outside Parliament House in Islamabad on Monday, joining them in raising their voice against the proposed Pakistan Media Development Authority (PMDA) bill.

The protesting journalists had marched on Sunday from the National Press Club and reached outside the Parliament House. They had been staging a sit-in since and continued the protest till President Dr Arif Alvi’s address to the joint session of parliament, which took place after 4pm on Monday.

While the protest outside the parliament has ended for now, a meeting of the federal executive council of the PFUJ will be held in Lahore from September 15-17 where the future strategy regarding the PMDA legislation will be decided.

Also on Monday, in an unprecedented development, reporters invited to cover the joint parliamentary session found the door to the press gallery locked, even though the parliamentary reporters association had assured the NA speaker that reporters would not create any disturbance as part of their protest against the PMDA. Government officials provided no explanation for why the press gallery had been locked, prompting journalists to stage a sit-in inside the parliament as well.

On Sunday night, former Prime Minister Shahid Khaqan Abbasi, PML-N Information Sec­retary Marriyum Aurangzeb and MNA Mohsin Dawar, among others, visited the protest site outside the parliament to express solidarity with the journalists.

Several politicians, including Senator Sherry Rehman and Raza Rabbani of the PPP, visited the protest camp on Monday as well and addressed the protesters.

Addressing the protesters, Iqbal lambasted the Pakistan Tehreek-i-Insaf government for “attacking and attempting to muzzle” the media.

Referring to the PMDA bill, he dubbed it a “conspiracy” and said if the bill was passed, “democracy will die in this country”.

The PML-N leader vowed to resist the “fascist law”.

Expressing solidarity with journalists, he added, “You (journalists) have survived gunshots, kidnappings and economic murder as you were fired from your jobs, but you didn’t stop speaking the truth and I salute you for this.”

He recalled that journalists had also staged protests when the PML-N was in the government.

“But we took it sportingly,” Iqbal added.

Later, PPP Chairperson Bilawal Bhutto-Zardari addressed the protest, saying that journalists in the country had bravely fought against and defeated former president Pervez Musharraf in the past, and they would also put up a fight against the incumbent government and its decisions challenging media freedom.

“I believe as far as the legitimacy of the government and media freedom are concerned, all [of us] are on the same page,” he added.

The PPP chairperson said he saw the PMDA as a continuity of measures taken in the past to place curbs on the media.

“Some people don’t want journalists to think freely and struggle for media freedom. We should not yield to them, and nobody will be able to infringe upon our rights,” he said.

He further stated that in present times, countries had been using the media as a tool to attack their rivals and to tackle the issue in Pakistan, media here needed to be empowered.

Bilawal said besides being “an attack on press freedom”, the PMDA law was also an assault on democracy and independent judiciary and a “financial attack” on journalists.

“It is an attempt to snatch journalists’ livelihood by putting such a big financial burden [on them],” he added, announcing that the PPP would join journalist protests across the country.

Bilawal said independent media was vital for societal improvement, adding that “we will resist any move to gag the media through [the PMDA] legislation”.

He told the protesting journalists that he would approach all relevant forums to oust Prime Minister Imran Khan’s government.

PML-N President Shehbaz Sharif too railed against the bill, terming it a “black law” and expressing solidarity with journalists.

“The government doesn’t have the guts to pass it and we won’t allow it,” he thundered. Shehbaz warned the government against passing the “black law” otherwise it would have to bear the consequences.

He said the media had a fought a war for its freedom and no one could snatch it . The PML-N president added that he would protest the issue with other opposition leaders in the National Assembly and try to achieve consensus with PPP and other political parties.

Inside the parliament, opposition members staged a vigorous protest against the PMDA bill during President Alvi’s address. Carrying banners such as “We reject media martial law” and “Opposition rejects PMDA”, they shouted slogans against the government and Prime Minister Imran Khan.

Meanwhile, police remained deployed outside the Parliament House as a security measure.

The protest call was given by various journalist bodies, headed by the Pakistan Federal Union of Journalists.

Meanwhile, the Parlia­mentary Reporters Association had also announced that reporters would boycott the presidential address in protest against the proposed media authority.

The PMDA has been conceived as a regulatory body that can “cater to the professional and business requirements of all forms of media and their users”, according to a government proposal, and is meant to replace the current “fractured” regulatory environment and “fragmented” media regulation by multiple bodies.

This means that according to the proposal, the PMDA solely will be responsible for the regulation of print, broadcast and digital media in Pakistan.

Under an ordinance drafted for the establishment of the authority, all previous laws pertaining to media regulation, control or indirect control will likely be abolished and fresh legislation will be enacted, giving legal cover to the PMDA and its functions.

However, the opposition and journalists see the bill as an attempt to curtail the independence of media.

Addressing the protesters in Islamabad on Sunday, senior journalists representing various associations of media workers vowed to resist the government move to enforce the PMDA, terming it an effort to gag the press.