Sources told The News two officials vehicles – Honda 1800 cc and Corolla 1300cc – are still in his personal use, one in Islamabad and the other in Lahore.

Raja Shafqat Abbassi claims that according to the notification his tenure will end on October 13, 2014 whereas in the brochures and annual book of PCP it is clearly mentioned that his tenure ends on September 7, 2014.

Sources told Raja Shafqat is pressuring the employee not to release brochures and annual book in which September 7 is mentioned as last date of his chairmanship. It is important to mention here that Raja Shafqat Abbassi has lost the power to sign cheques, as information ministry has nominated DG Internal Publication (IP) Muhammad Naeem as the second signing authority at the Shafqat’s tenure. When The News contacted Raja Shafqat Abbassi he claimed that according to the notification his tenure would end on 13 October 2014 and till that time he is authorised to use official privileges including vehicles. He said when his tenure ends he will return all official belongings the same day. He claimed he is unaware that that he can’t sign official cheques. He also denied pressuring employees not to release brochures.

Sectary Information M Azam confirmed to The News that Raja Shafqat Abbassi’s tenure ended on September 7, 2014 and said he could not say on which ground he is claiming that his tenure will end on October 13. He said according to the rules chairman PCP is supposed to hand over all official belongings the day his tenure ends. “I will look into the matter,” he said. 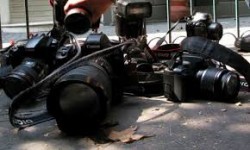