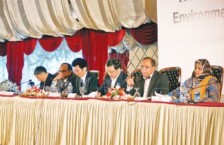 KARACHI: Environmentalists, wildlife experts and other stakeholders at a public hearing of a coal power project to be built at Port Qasim declared its Environmental Impact Assessment (EIA) report ‘highly flawed’ stating that it seemed to have been prepared in haste.

The public hearing was organised by the Sindh Environment Protection Agency (Sepa) at a hotel on Thursday. The project comprising two units of 660 megawatts will be built by Sinohydro (Hong Kong) Holding Limited with financial support from Q Invest, Qatar’s leading financial services firm. The total project investment is said to be $1.95 billion and the total area required for the installation of the proposed power plant is 203 acres including a large area yet to be be reclaimed.

The estimated annual rate of coal consumption will be 4.6 tonnes and will produce 310,061 tonnes of fly ash and 54,871 tonnes of bottom ash annually. The coal-fired power plant is stated to be constructed on the north-west edge of the Indus delta system, which is characterised by long and narrow creeks, mud flats and mangrove forest ecosystem.

Representing the International Union for Conservation of Nature (IUCN), Ghulam Qadir Shah said the project would not only have a devastating impact on the area’s marine ecology, but would also badly affect fishermen’s livelihood. “Have you studied that?” he asked, citing that the EIA report lacked the mention of important marine species such as whales, dolphins and turtles found in the area.

He said it seemed that no consultations were held with local fishermen who were the main stakeholders in this project.

“False information has been provided in the report that no community lives near the project site that in fact is a fishing ground. The mitigating measure suggested by consultants that construction activities should be avoided in the fish spawning period of July and August is not enough.

“There is no mention of any planning in case of an emergency in a disaster-prone area. You would be handling huge quantities of coal on a daily basis and in case of rain the entire coal leakage would end up in the sea. The situation would be even more dangerous in case a tsunami strikes,” he said.

He also questioned the proposed land reclamation under the project for which two million cubic metres of sand would be excavated from another place. “This would have a hydrological impact at the other site, causing a change in the groundwater recharge. When you reclaim land and change the sea’s natural flow, it would lead to coastal erosion. This important point has been completely ignored in the report,” he said.

Citing other errors, former provincial forest and wildlife secretary Shamsul Haq Memon said the EIA report stated that the project site was not an ecologically sensitive area. “In an area where mangroves are being grown, it is ecologically important. The subject of waste treatment hasn’t been handled properly in the report,” he said, emphasising that the issue of ash disposal should have been sorted out and addressed in the EIA report.

Sharing his views, former director general of the Pakistan Council of Scientific and Industrial Relations (PCSIR) Dr Mirza Arshad Ali Baig said the report didn’t examine the impact of the coal ash contained carcinogenic heavy metals and seemed to have been prepared in a rush.

“You just cross Ghaggar Phatak and you would smell ammonia. The fact is that we don’t have the capacity for such mega projects that will only harm the people and the ecology,” he said, terming the project ‘a burden on the coast’.

Some speakers were of the opinion that no baseline data had been presented in the report.

They also criticised the Port Qasim Authority (PQA) that they said had allowed at least three firms to build coal-fired power plants on its land in the absence of a cumulative strategic environmental and social impact study to ascertain the short- and long-term impact of operation of the plants on humans and the marine ecology.

“As a land owner, it’s the PQA’s responsibility to conduct the Strategic Environment Assessment. We, as citizens, want to know how many projects are coming up,” said Saqib Aijaz, an environmentalist, adding that no one knew about them as the PQA had never submitted its master plan.

During the discussion, it also came to light that no consultations had taken place over the infrastructural capacity at the Port Qasim in coal transportation and handling as per needs of three coal-based power projects that could create problems at a later stage.

The discharge of hot water and sledge into Gharo Creek and its impact on marine ecology was also a cause of concern among the stakeholders one of whom called for a study to examine how human health would suffer due to the operation of coal power plants.

Hidayat Hasan of Hagler Bailey Pakistan, which prepared the EIA report, admitted that there was a need for a study to examine the cumulative impact of the three power projects.

He claimed that a number of changes had been made to the project design in order to address stakeholders’ concerns. He added that the measures included taking away the ash disposal site away from the project site for which a separate EIA would be conducted.

“The use of electrostatic precipitators will ensure maximum removal of dust particles from the exhaust gases. Covered conveyor belt system will be used for coal transportation while sand for reclamation will be taken from a licensed site dedicated for this purpose,” he said.

As for marine species, the Hagler Bailey representative was of the opinion that they would ‘gradually adapt to the change and recolonize’.

The firm, he said, was in the process of taking approval from the forest department for uprooting mangroves for which a proposal was under consideration to replant mangroves at another site.

On his part, Sinohydro President Shen Decai assured the participants in the programme that construction work on the project wouldn’t be started unless the firm received a no-objection certificate from Sepa.

However, he assured the audience that they would “pay high attention to concerns being raised. The project life is 30 years or more so we will be here to take care of the emission factors.” 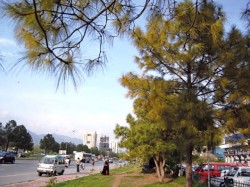