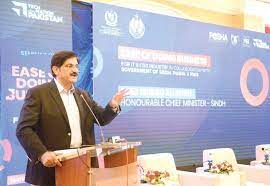 He made this announcement while speaking at a seminar organized by Sindh Information Science & Technology Department and Pakistan Software Export Board & P@ASHA on the topic of Ease of Doing Business for IT/ITeS Industry at a local hotel. The seminar was attended by Federal Minister for IT Syed Aminul Haque, CM Special Assistant on IT Tanzila and others.

Shah said that he would announce the relief to the IT industry in his budget speech tomorrow (today/Tuesday). The CM said that extensive growth in IT exports had put pressure on the supply of quality HR. “If we don’t immediately invest in our HR building then we will lose the trajectory of growth,” he said and added his government was fully aware of this supply and demand gap and had planned to initiate multiple skill building programmes in the next financial year.

The programmes the CM announced to initiate include high-end bootcamps for the youth, skill building for teachers and trainers, digital literacy for primary and secondary, skill programme for girls and skill and freelancing programmes for differently-abled persons

Murad said that digital transformation of Sindh could only become a reality if we employ effective public private partnership. “In order to reengineer the existing government processes and introduce innovative citizen services, it is imperative to engage our youth, involved in innovative ideas and solutions, into government systems,” he said and added for fulfilling this objective, the government of Sindh was focusing on different programs including promote startup culture through incubators and accelerators, Private Equity (PE) and Venture Capital (VC) funding, startup induction in govt operations/services and special incentivise for women owned startups.

Talking about E-governance, the CM said that automation of government operations was a fundamental building block for efficient and effective governance. He added that his government was committed to improve governance through use of technology in its operation.

Murad said that Sindh had already taken initiatives for establishment of Sindh Digital Board, automation of govt operations, online government services for citizens and business and continuous citizen awareness for opportunities and threats.

The chief minister said that for a developing country like Pakistan, efficient provision of basic citizen services could not become a reality without the intervention of technology. “The Sindh government wants to leapfrog in use of digital technologies and overcome the existing challenges in provision of basic services to citizens,” he said and added that his government had decided to heavily rely on use of technology and had planned programmes for technology intervention in focused area of health, agriculture, education, and woman empowerment.

It is well understood that the solution to the economic problems faced by Pakistan lies in the growth of our IT exports, the CM said and added the growth in IT exports not only would bring much needed dollars in the country but also bring economic prosperity. Therefore, Mr Shah said, his government was committed to facilitating the IT sector by providing fiscal and non-fiscal incentives and projects for enhancing IT export from Sindh and policy interventions and procurement regulations to promote use of local IT solutions. Talking about ICT infrastructure, Murad said that Pakistan’s IT sector was mainly composed of SME. He added the Sindh government realised that the low cost IT had enabled infrastructure needs of the sector.  The CM said that his government planned to roll out such infrastructure across the province with the help of Pakistan’s software export board. He added that the provincial government was also in the process of adopting Sindh’s first “cloud first policy”.

Giving his government directions in this regard, he said it included to coordinate with the federal government for broadband for all.

Federal IT Minister Aminul Haque speaking on the occasion said that he was working hard to spread the network of optic fiber cable in every nook and corner of the province. He deplored that in the 1970s, the first IT industry was established in Karachi and today the city was at number three in IT establishments. Aminul Haque urged the Sindh chief minister to incentivise the IT industry in the larger interest of the country. CM Special Assistant Tanzila Ume Habiba also spoke on the occasion.