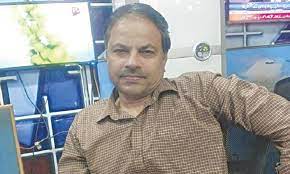 KARACHI: Nafees Naeem, an assignment editor at Aaj News channel, went missing from near his home in Nazimabad on Monday afternoon and is believed to have been abducted by unknown persons traveling in a Vigo, according to police, the TV channel’s administration and media organizations.

West-Zone DIG Nasir Aftab told Dawn that as per the family’s statement, Nafees Naeem had left his home in Nazimabad on Monday afternoon to purchase groceries when unknown persons took him away.

The senior officer said when they received information about the incident, police immediately contacted the family and the Nazimabad SHO also visited the family home.

Police have also obtained CCTV footage from the spot and the DIG said video footage showed men in plainclothes traveling in a 4×4 Vigo apparently took away the media worker. Mr Aftab said he had personally spoken to the journalist’s wife who informed him that her husband had left home at around 3.50pm to purchase chicken from a nearby poultry shop before he was taken away.

The DIG said police have asked the family to lodge an FIR.

The officer said the journalist was not detained by the police, adding that no police station in West Zone was holding Mr Naeem.

“Nafees Naeem has been associated with the channel for the last 10 years,” added the statement.

Interior Minister Rana Sanaullah has also taken notice of the journalist’s disappearance. A statement issued on Monday night said the minister had spoken to Sindh Inspector General Ghulam Nabi Memon and directed him to ensure Mr Naeem’s swift recovery. He also assured the provincial police chief of complete cooperation from the federal authorities in this regard.

The Aaj News administration in the statement condemned the ‘abduction’ of their employee. “Suppose, if Nafees Naeem had committed any illegal action, legal procedure should be adopted,” it said.

“No institution can be given right to take away any citizen without any charge, FIR or complaint,” said the Aaj administration. Such action by any institution was a matter of shame for the government, it added.

The PFUJ leadership urged the Sindh government and police to take urgent measures for the safe release of Mr Naeem and make all-out efforts for the safety and security of journalists and media workers, otherwise protest will be launched against such disappearances.

The KUJ gave a 24-hour ultimatum to the Sindh government to recover the journalist, otherwise they would initiate protest. It urged Sindh Chief Minister Murad Ali Shah to take notice of the incident and get him released immediately.

Moreover, in a statement the Association of Electronic Media Editors and News Directors also condemned the journalist’s disappearance.

Demanding Mr Naeem’s immediate recovery, the organization said that the repeated kidnappings, killings, enforced disappearances and harassment of journalists in Pakistan were a matter of concern and shame.