KARACHI: Pakistan and Japan have friendly relations based on historical lines, however, the people here are unaware of the cultural ties and about Japanese culture in particular, said Yasuharu Shinto, deputy consul-general of Japan in Karachi.

Shinto said this at Japan Fest 2016, orgainsed by the Consulate General of Japan, in collaboration with Pakistan Japan Business Forum and Pakistan Japan Cultural Association, at Pearl Continental Hotel on Thursday.

“We are here to disseminate information. There is certainly more to Japan than Mount Fiji, Geisha and Sushi Tempura,” Shinto added, while referring to the need for holding this exhibition. The youth here find Japanese animation as an interesting tool for entertainment, Shinto said, adding that they want to invite youngsters to take interest in studying at Japanese universities.

At the cultural festival, Bonsai (miniature plants) and Origami stalls, which is the art of paper folding, were set up for the audience. A group of participants also played to the tune of a Japanese song called Sakura Nashori, while some dressed up in their favourite Japanese characters. In the Origami section, a Bohra couple, Shabbir Bandukwala and Kaniza Shabbir Bandukwala, were inculcating the art of Origami to whoever was turning up at their stall.

“My husband started making Origami pieces about ten years ago as a hobby,” Kaniza told The Express Tribune enthusiastically. According to Kaniza, Shabbir learnt making Origami pieces from YouTube and various books. From simpler ones to the advanced versions, Kaniza said that Shabbir has near-mastered the art to make Origami. She added that hundreds of art pieces of birds, animals, flowers and lanterns, made by Shabbir, are at their home.

Kaniza believes that the coloured sheets used in Origami serve as a mandatory component in making these pieces. “It requires a lot of patience to learn this technique that my husband has practiced as a hobby for so long,” Kaniza said, adding that even she has not yet learnt this art. She believes one has to practice a lot before finally making a perfect Origami piece. “It is an inborn art and it certainly reduces stress when you make it. It requires lots of patience but it can certainly keep you away from depressive moods,” she added. 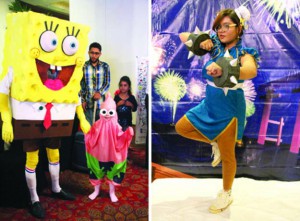 At another stall, Irza Naveed, who once visited Japan not too long ago, had set up a make-a-wish tree. She was asking people to write their wish on a piece of paper and tie it to the branch of the Bonsai tree that she had fixed on her stall. Speaking about the history of the idea, Naveed said the practice was started by a couple, who could not communicate, by hanging paper pieces for each other to interact with one another.

Dawn: The sound of a flying bird