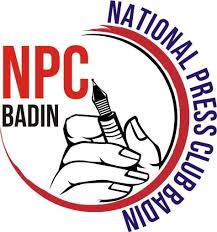 BADIN- Malik Illyas, Shoukat Memon and others made a clean sweep in annual elections of Badin Press Club on Saturday.