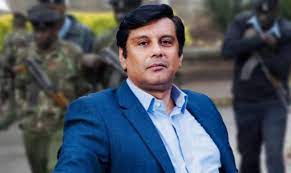 ISLAMABAD – The wife of senior Pakistan journalist Arshad Sharif, who was shot dead in Kenya last month, has written a letter to President Dr. Arif Alvi, seeking a United Nations-led probe into his brutal killing.

Sharif was killed near Kenyan capital Nairobi on October 23 after he reached there from Dubai as he left Pakistan in August over alleged threats to his life.

The Kenyan police have termed the incident as a case of “mistaken identity” during a search for a car involved in kidnapping of a child. The Pakistani government have since been claiming that it was targeted killing.

The body of the slain journalist was brought back to Pakistan days after his murder and a post-mortem was carried out at the PIMS Hospital in Islamabad. The autopsy reportedly revealed that Sharif was tortured before the murder, however the claims have not been verified by any official.

Citing “discrepancies, anomalies and contradictions” in the initial probe, Sharif’s wife, Javeria Siddique, asked the president that a UN-led investigation should be held in the case.

“I, therefore, request you to help us in ensuring a through probe into Shaheed Arshad’s brutal murder by no other than a high-powered international team of experts under direct supervision of United Nations, for dispensation of justice that my shaheed husband truly deserves,” read the letter dated November 17.

She said that her husband was continuously being “harassed by the current political regime to intimidate and scare him by way of different methods, which inter alia, included the registration of fake first information reports (FIRs) against him under so-called ‘treason’ and ‘sedition’ charges in various part of the country, due to which he was compelled to leave Pakistan in August 2022.”

“We as a family of Shaheed Arshad Sharif were left completely devastated by his gruesome murder. Ever since that ignominious day, we have been desperately running from pillar to post to seek justice for him,” she said.

“Be it the small task of initiation of investigations, conduct and report of post mortem or the absolute shamelessness with which certain people have used his death for the furtherance of their own agendas and the settling of scores, we have not received any support from the state or the country.”

She also requested the president to help them approach the Supreme Court of Pakistan for the formation of a judicial commission for a transparent probe into the murder of her husband.