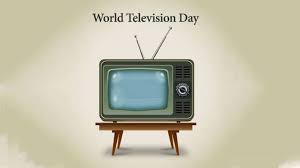 World Television Day was marked across the globe including Pakistan on Monday through highlighting the importance of television as an important scientific invention which has impacted the decision making process in every sphere of life and raised awareness about significant issues globally.

The day was marked by various organizations, especially educational institutions, through a number of events to project the significance of this important scientific invention in our daily lives. Television continues to be the single largest source of video consumption.

Despite the screen sizes have changed, and people create, post, stream and consume content on different platforms, still the number of households with television sets around the world continues to rise. The interaction between emerging and traditional forms of broadcast creates a great opportunity to raise awareness about the important issues facing our communities and our planet.

In recognition of the increasing impact television has on decision-making by bringing world attention to conflicts and threats to peace and security and its potential role in sharpening the focus on other major issues, including economic and social issues, the United Nations General Assembly proclaimed November 21 as World Television Day (through resolution 51/205 of 17 December 1996). World Television Day is not so much a celebration of the tool, but rather the philosophy which it represents. Television represents a symbol for communication and globalization in the contemporary world.