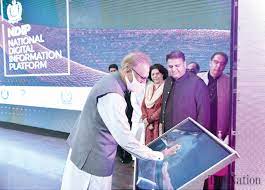 Through effective utilization of the latest media platforms, the president said the Kashmir issue should be raised in a more “effective manner” throughout the world whereas, the Muslim Ummah must present its narrative over Islamophobia.

The president expressed hope that with this transformation process, the outreach of the country’s state media would be enhanced. He said the era of digitation of state media outlets would help build “a real image and true culture of Pakistan”.

The Digital Transformation of State Media (DTSM) project, initiated by the information and broadcasting ministry – also included the Directorate of Electronic Media and Publication (DEMP) as well as the advertisements of the ministry.

Under the project, the APP Digital would be fully operationalized and would be expanded, the PTV News would go high definition (HD), Pakistan Radio would start podcasts, and National Media University would be established with a focus on art, design, animations, digital journalism. Moreover, the DMW would focus on strengthening the digital media presence of Pakistan.

Congratulating Information Minister Fawad for his endeavors, the president also stressed the need for busting fake news being circulated by enemies of Pakistan.

He said most recently, India had propagated and churned out fake news against Pakistan.

Moroever, Fawad said that in the modern era wars were being “fought on the media,” and only those nations were successful which had strong narratives.

The launching of National Digital Media Platform would help project Pakistan’s image and the national narrative at the international level more effectively, he added.

Unfortunately, he alleged that the information ministry in the past had been downgraded as it became the mouthpiece of the ruling parties.

Due to weak narratives, the minister said, the countries lost their strategic importance.

Despite the martyrdom of over 70,000 Pakistanis in the war against terrorism, Pakistan remained on the defensive as it could not project the above sacrifices in an effective manner, he added.

Fawad said that it was an important day for the transformation of the official media in Pakistan. The Pakistan Television, which was launched in 1964, was going HD, Radio Pakistan shifted to the internet and the APP was digitized.

The minister said that despite many problems the Press Information Department had become paperless, as all the processes of issuance of advertisements to the media outlets, including the billing process, had been computerized with the elimination of human involvement.

“For the first time there are no outstanding dues of media houses against the government,” he added.

In the past three months, Rs670 million were paid to the media houses, which also proved helpful in payment of outstanding dues of the media workers, the minister said.

Fawad said a media technology university was also being established to bring new technology in film and television production.