ISLAMABAD: The Short Messaging Service (SMS) for verification of voters list launched by the Election Commission of Pakistan (ECP), in collaboration with Nadra and telecom companies, received over 55 million hits and generated multi-million rupee revenues for each stakeholder.

When contacted, Secretary ECP Ishtiaq Khan said on Tuesday the total hits on this service were over 55 million as people used this technology to get verification from the voters list.

However, the sources saidcampaigns from May 1, 2013 to May 11, 2013, the number of SMS on per day basis went up by 1,000 percent compared to the same period of the last year and resulted in generating billions of rupees in the shape of total revenues for the telecom companies.

Some industry sources say that SMS from May 1 to May 11 went up to one billion per day basis as thousands of candidates and their supporters used this technology to convince voters to cast votes in their favour.

The registered voters were given the facility to send their Computerised National Identity Cards (CNIC) number without hyphen via SMS to 8300 anytime from anywhere in the country and they subsequently received a message in Urdu containing their name, village, city, Tehsil or district, location (electoral area) and the serial number of vote registered in the preliminary electoral rolls.

For this SMS at 8300, the service charges were fixed at Rs2 per message of which 60 paisa each were given to telecos, ECP and Nadra and the remaining 20 paisas were given to the government in the shape of taxes.

When contacted, Chairman Nadra Tariq Malik on Tuesday said that the total received messages on this service stood at 51.5 million and overall this service performed very well. When asked about choking of the service on the election day, he conceded that it got choked for two hours on May 11, 2013 but engineers of Nadra had worked hard to rehabilitate it.

However, the sources in Nadra confirmed that it faced a loss on account of 8300 SMS service as it had cost Rs90 crore for developing its software but its share in revenue would be only 46 crores. The ECP, the sources said, had not so far provided share to all the stakeholders in earned revenues, including Nadra and each of the telecom companies.

When contacted, the spokesman of Pakistan Telecommunication Authority (PTA) said that he did not have full information about the total SMS received on the 8300 service. On the request of the ECP, the PTA had developed a short code of 8300 for the verification of voters list. 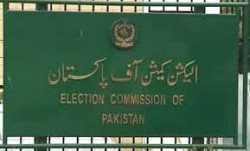