15 including a journalist arrested from Gwadar 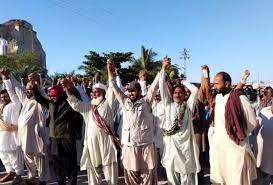 GWADAR: At least 15 people including a journalists from Gwadar have been arrested at shifted to the central jail in Turbat, Bol News reported on Monday.

Meanwhile, police are carrying out raids to arrest chief of the Haq Do Tehreek Maulana Hidayatullah. ‘Haq Do Tehreek’ protestors shoot dead policeman in Gwadar

On December 27, the situation had turned tense as protestors of the “Haq Do Tekreek’, who had been staging a sit-in in Gwadar for several days, allegedly opened fire and killed a policeman.

The incident had occurred at the Syed Hashmi Chowk in Gwadar when enraged protestors had opened fire on police constable Yasir, who was on duty to provide protection.

According to reports, the bullet had hit the constable directly in the neck. He was taken to Gwadar Development Authority (GDA) Hospital where he had succumbed to his injuries.

Balochistan Police Spokesman had said the Maulana Hidayat-ur-Rehman, who leads the movement, was resorting to violence to achieve his nefarious political goals and even shooting at security guards.

The spokesperson had said the police were making all efforts to protect the lives and property of the general public and avoiding the use of any kind of firearms in every situation. IG Police Balochistan Abdul Khaliq Shaikh had ordered to arrest the accused involved in the incident as soon as possible.