YouTube and the pursuit of happiness | Pakistan Press Foundation (PPF) 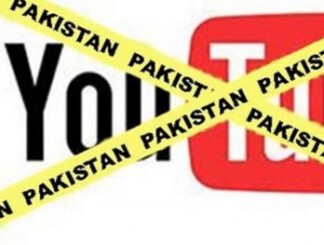 Pakistan enjoys nothing more than proving the wisdom behind the cliché ‘cutting off your nose to spite your face’. It is entirely appropriate that the phrase can be traced back to a time in Europe when women would mutilate themselves in order to protect their ‘purity’, since all our most self-destructive actions involve misbegotten notions of honour and morality.

For an entire year now we have had to make do without one of modern civilisation’s most comforting creations – YouTube – just because some loser who is now languishing in jail put up a trailer for a movie that was never even made. We ended up punishing the estimated seven million Pakistanis who use YouTube just to ‘protect’ them from something they either would never have heard about or shown no interest in perusing. And we have continued doing so for 365 days! At this point our nose is so disfigured only rhinoplasty will restore it.

Nothing is more annoying than the smug self-satisfactory ignorance of those who support the ban. There are many, who obviously understand nothing of how YouTube, or indeed the internet, works who have gleefully explained how the ban in Pakistan is costing Google so much lost revenue. Such inconvenient facts, like YouTube not making any money from the country because it doesn’t have a country-specific site here or that it loses nearly half a billion dollars a year, do not matter to a mind that closes itself off to reason.

A recent online poll conducted about YouTube in Pakistan found that over 60 percent of people claim to use the video-sharing site for educational purposes. In an equally unscientific assertion, I would venture that more than 50 percent of those people were lying, unless education is defined as learning about the art of reverse swing from old clips of Wasim and Waqar. Those who want YouTube unblocked are already ceding a lot of ground when they try to defend the site as a tool for learning rather than what it really is: lots and lots of fun.

The one thing this country could use is people who stand up for having a good time. There are a lot of things that can’t be defended on the grounds of utility but still provide much joy to the world. Failing to acknowledge the pleasure principle is what has led to all those fun things still being illegal which were outlawed more than three decades ago in Zulfikar Ali Bhutto’s last-gasp attempt to save his rule.

Since ZAB’s time there has unfortunately been a surge in the kind of people who HL Mencken described as harbouring the “haunting fear that someone, somewhere may be happy.” Fighting back against that mindset on all fronts is mandatory if we don’t want censorship and a loss of liberty to continue for another three decades.

The YouTube ban, powerful though it is as a symbol of censorship since it most affects the wealthy who are only used to the freedoms of others being taken away, is only one example of the killjoys encroaching on our right to seek what the US Declaration of Independence called the “pursuit of happiness.”

In Khyber Pakhtunkhwa the MMA government became notorious for defacing and tearing down billboards and giving a good go at destroying Pakhtun cinema. Self-righteous thugs and charlatans have attacked theatres, enacted the harassment of innocent teen couples for the enjoyment of the moral police watching along on their TV screens and cast judgement on anyone who does not live their life the exact way they want them to. And all of us have been too scared to speak out for fear of being cast as irreligious or, horror of horrors, secular.

Pakistan has become a country where we are no longer to pursue what makes us happy, even if isn’t hurting anyone else. The professional scolds in society are no longer content to mind their own business despite being under no compunction to alter their lifestyle from the evil secularists. This is why those who denounce extremists on both sides are being so disingenuous. There is only one side that is giving the other marching orders and shoving their virtues down our throats. The other side would just like to be left alone and for everyone to be free to choose which lifestyle they prefer.

The debate – to the small extent that it exists – has been framed as one between virtue and sin rather than freedom and censorship. This is why nothing remotely positive will be written about anything that has been denounced by a small but extremely vocal minority. Everyone is simply too cowered by them, and the threat of violence implicit in their moral denunciations, to mount a challenge. The ban on YouTube was meant to stave off any potential violence that may have been caused by the offending trailer. Yet, we still had violence just a few days after the site was blocked. Now a year later the ban has become the norm and, in an inversion of the way things should be, we have to argue that the ban is illogical rather than forcing proponents of the ban to explain why it still continues.

Freedom in this country is nothing but a poetic truth trotted out around election time so that we can be proud of being a democracy. For true freedom to prevail – the kind where preening moralists and fearful governments cannot simply snatch away anything they don’t want us to enjoy – the ballot box is only the first rest stop in a long journey.

The writer is a journalist based in Karachi. Email: nadir.hassan@gmail.com