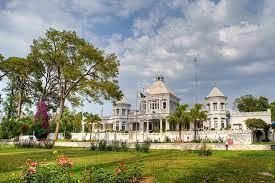 Cash prizes were also given to winners of the competition.

Speaking on the occasion, Jamal Shah said Pakistan was full of beautiful imprints that needed to be shown to the world. He said it was up to the youth of the country in general and young film-makers in particular to highlight the beautiful face of the country.

He praised the department of Communication and Media Studies (CMS) of the Fatima Jinnah Women University (FJWU) for organising the festival, adding that such events were much needed to provide a competitive opportunity to the youth to nurture and transform their innovative ideas into digital media content.

Speaking on the occasion, FJWU Vice Chancellor Dr Saima Hamid said the university was a leading institute which was following new trends, especially during and after the Covid-19 pandemic.

“Events like NAQSH Digital Film Festival are crucial for implementing the goal of women empowerment which is in line with the vision of Fatima Jinnah Women University,” she said.

The festival’s director and head of Communication and Media Studies department Dr Mohammad Ali was of the view that it was the vision of the department to provide platforms to students where they could learn and experience the practical aspects of the production, which ultimately led towards creating the skilled workforce for the media industry.

Yasir Qadir, CEO of Rime Digital and collaborator of the festival, said Pakistan had a strong talent base as witnessed through all the entries submitted in the competition.

The stories were really inspiring and the digital infrastructure is growing which proves that it is the right time to focus on digital media sector from both content and platform creation perspective, he added.