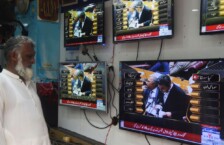 ISLAMABAD: The Supreme Court declares that the Pakistan Electronic Media Regulatory Authority (PEMRA) chairman cannot be given the sole and unfettered powers to suspend broadcast licenses.

A three-judge bench, headed by Justice Ijazul Ahsan and comprising Justice Munib Akhtar and Justice Sayyed Mazhar Ali Akbar Naqvi on Thursday heard the appeal against the Sindh High Court (SHC)’s judgment. The PEMRA had filed an appeal before the Supreme Court against the judgment of the high court. A Division Bench, headed by Justice Muhammad Ali Mazhar, on 13.08.2021 had declared the delegation of suspension of broadcast licenses to chairman PEMRA as illegal and directed that unless rules are framed structuring this delegated discretion, no such delegation to chairman PEMRA can take place. PEMRA in its 156th meeting dated 24.05.2020, had conferred the authority’s power to suspend the broadcast licenses of any channel on any violation of the PEMRA laws to the chairman PEMRA, who was given the sole authority to decide the issue of suspension. In pursuant to this delegation, the chairman PEMRA had arbitrarily suspended the broadcast licenses of various channels.

Pakistan Broadcasters Association had challenged this delegation of the power to suspend to chairman PEMRA before the SHC.

The counsel for PEMRA argued that this delegation of suspension to chairman PEMRA as the sole decision maker regarding suspension is completely legal and there is no need to structure this power conferred on the chairman PEMRA. During the hearing, the bench made the following observations: Justice Mazhar said; “If this is allowed then this will lead to an autocracy of the chairman PEMRA, and the collective wisdom of the PEMRA Authority will be destroyed”.

Justice Munib Akhtar stated; “If such unfettered delegation is allowed then tomorrow PEMRA can delegate the power to dismiss any of its employees to anyone, even outsiders.” “There has to be a structuring of the discretion to suspend otherwise it might severely damage the fundamental right of freedom of speech under Article 19, Constitution”. “The power to suspend is such a drastic power affecting broadcast licensees that it cannot be delegated to anyone without structuring of this discretionary delegation through the framing of rules.”

Justice Ijazul Ahsan observed it is not understandable as to why PEMRA has not been able to frame rules for delegation for the last 20 years. Even over a year has passed since the judgment of the High Court, still PEMRA has not framed any rules to structure these discretionary powers. Faisal Siddiqi, counsel for the PBA further argued that if this is allowed this will lead to the dictatorship of the PEMRA chairman as suspending a broadcast license even for a short while can destroy the business of the news channel and will lead to its closure.

After hearing all the parties, the Supreme Court was pleased to dismiss the PEMRA’s appeal and uphold the declaration that the delegation of the power to suspend by chairman PEMRA without framing of rules structuring this discretion is illegal.