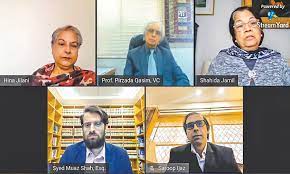 KARACHI: Minority rights and a look at the history and future of human rights in Pakistan were the main topic of the discussion during an online interactive dialogue titled ‘Human Rights Vision 2020 & Beyond’ on Wednesday.

The event was organized by Ziauddin University (ZU) in connection with the International Human Rights Day.

Highlighting the issue of minorities, former federal law minister Barrister Shahida Jamil spoke about the Muslims of India and how insecure and badly treated they are by the majority Hindus there.

“The Muslims left behind in India after the subcontinent’s partition fall in the category of Dalits today,” she said. “After 1947, their condition has deteriorated. They are worse off than us before partition,” she said.

Recalling the days around partition, she said that she was only a little girl at the time but those memories of riots everywhere were still fresh in her mind.

“My parents used to leave me home with servants with instructions about what to do and where to go with me if they don’t return. I remember seeing fires in Muslim settlements at a distance from our home, I can’t forget the stench of burning human flesh, I experienced the riots, I saw the making of Pakistan,” she said with a lump forming in her throat.

“Then after all that had happened there was no way of living together. We were outcasts in India, untouchables. We couldn’t live together anymore. As a result of that many Muslims, even those against the creation of Pakistan, came here. They were people with all kinds of thinking and mindsets. We need to overcome what those people with different thinking say. But instead we created divides,” she said.

‘No lesson learnt from fall of Dhaka’

“We have not learned from history. Yes, we started off as nationalists but we are still going through the post-liberation trauma,” she continued.

Coming to 1971, as the day also coincided with the fall of Dhaka, she said that we have also not learned anything from that tragedy. “There was the Hamoodur Rahman Commission Report, the war report, which was censored by Bhutto. And it remained hidden from us while we were getting to hear different versions of it from outside sources. It was only when I was serving as the law minister in the Musharraf government that I urged the government to print it finally to at least let the people of this county know what actually happened in 1971. The report only showed a one-sided view of the eastern side of Pakistan,” she said.

“We have a lot of issues. But as Pakistanis, we are all in this together. Where is the will? If we can bring it together, we can homogenize. I ask our young generation to value human rights and in doing so don’t step on others’ human rights. You give and you will get. Struggle and obtain,” she said.

“Our courts and our police discriminate, which has created a constitutional hierarchy of citizenship and we are facing a societal prejudice. We have the challenge now of avoiding majoritarianism like they have in post-Modi India. How to climb out of this? There is no short answer,” he said.

Talking about the marginalized sectors in society here he said: “After 1978 and ‘79, we took in Afghan refugees. However, we don’t have a domestic refugee law. So after the Army Public School tragedy, we saw a crackdown by the government. When your ministers and senior officers are giving message to the police that it is fine to intimidate and harass any Afghan here, it will keep on happening.

“Rohingyas too,” he said. “We have third-generation Afghans and Rohingyas here whose legal status is in limbo, making them vulnerable to so many things. There is no country to deport them to because they have never been citizens of any other state. But still they can’t even say that they belong here,” he pointed out.

Hina Jilani, founding member of the Human Rights Commission of Pakistan and the Women’s Action Forum, also said that even though there was a vision, there was no political will to do good for these people as the government had other priorities.

“These people are marginalized because the state made them so and then the society suppressed them. Your majority population are treated as superior by the state thanks to the principles and policies here. They exclude non-Muslims. They are said to be ‘tolerated’, not ‘adjusted’,” she said.

“We have a legal framework but it is flawed. Then only law doesn’t give you your rights. Groundwork is also needed,” she said. “People can have a unified drive to make things work. You can’t take action without outrage. Outrage propels you,” she said.

“The people of this country are still asking for human rights, even after getting freedom from the British rule. Therefore, we need all people in decision-making positions to understand human rights in order to be able to take positive strides in the right direction,” he said.

Syed Muaz Shah, director of the Centre for Human Rights, Faculty of Law, ZU, who moderated the discussion, concluded the session then by asking all students and young people watching to “be the change you want to see”.