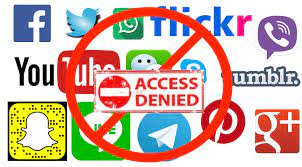 ISLAMABAD: Access to social media networks remained blocked for hours on Friday after the government imposed a blanket ban as part of its security plan to maintain law and order across the country and prevent violent protests in the wake of its decision to ban the Tehreek-i-Labbaik Pakistan (TLP) along with a clampdown on its activists.

While the restriction on Twitter, Facebook, WhatsApp, YouTube and Telegram remained in place from 11am till 3pm without prior intimation to users, Minister for Interior Sheikh Rashid Ahmed later in a video statement apologised to citizens for inconvenience it caused and reasoned that the measure had become essential as some [violent] protests were feared.

Just before the Pakistan Telecommunication Autho­rity (PTA) was direc­ted to temporarily block access to the social networking sites, Minister for Infor­mation and Broadcas­ting Chaudhry Fawad Hussain in a tweet disclosed that the government had established a special cell comprising Lahore Safe City, Nadra and other agencies to identify people involved in violence against the authorities during the week.

Till then, dozens of people had been identified through videos and action was being taken against them under anti-terrorism law, the minister said, adding that the district administration would ‘monitor all the speeches’ as well.

A senior official of the interior ministry, on the request not to be named, confided that similar actions could be taken in coming days too if there were any reports or information that TLP workers or any other group acting in their support would initiate public protests.

“We all have seen the key role of social media in mob formation and instigation of public sentiments, especially in the recent days when many parts of the country faced unrest and protests by the proscribed TLP,” the official added.

The interior minister in his video statement said: “I am sorry for situation and the troubles faced by all Pakistanis. As minister, I apologise for the inconvenience, but it was necessary as they [TLP] had given a call to resist the authorities and some protests were feared.”

After announcing that the situation across the country was under control, the minister expressed the confidence that the TLP could not cause a breakdown of law and order in future. He also highlighted the legal procedures and restrictions to be faced by the TLP and its leadership due to the ban imposed under the anti-terrorism act.

As access to the social networking platforms began to be restored at around 3pm after Friday prayers, PTA and internet service providers were questioned by subscribers and media persons about the sudden and blanket ban across the country while some ISPs informed users about the situation through text messages in the evening.

Islamabad-based ISP Nayatel texted to its customers: “Social media platforms had been blocked on the directions of the PTA, these platforms include Twitter, Facebook, WhatsApp, YouTube, TikTok and Telegram. The inconvenience is regretted.”

Some ISPs also forwarded SMS to customers that in addition to the social media platforms, Google services, too, had been affected in certain areas.

While criticizing the move to block access to social media across the country in the fear of protests, digital rights activists said such blackout without any prior intimation could lead to more severe curbs on freedoms in future.

Digital Rights Foundation head Nighat Dad tweeted that the arbitrary decisions of blocking and banning had never done any good and instead opened ways to blanket bans.

Interestingly, the PTA did not issue any directive to the telecom sector and the social media platforms to ensure restrictions on the communication of proscribed TLP though a day ago, the electronic media regulator had banned electronic coverage of the recently proscribed religious party. In its notification issued late Thursday night, Pakistan Electronic Media Regulatory Authority (Pemra) declared media coverage of the proscribed organisation was prohibited. “All satellite TV channels and FM radios licensees are hereby required to restrain from providing any kind of media coverage to this (banned) organisation,” read the notification.

In a related development, detained TLP chief Saad Rizvi in a handwritten note, which was shared by Special Assistant to the Prime Minister on Political Communication Shahbaz Gill, urged his followers to maintain law and order and avoid blocking roads and highways.

The young TLP chief in the letter, whose authenticity could not be ascertained, asked his supporters to peacefully return to their homes and cooperate with law enforcement agencies.

Earlier on Thursday evening, Minister for Religious Affairs Pir Noorul Haq Qadri hosted an iftar dinner for senior clerics apparently in an attempt to muster their support for the ban on TLP and to prevent a possible massive reaction to the move.

The interior minister, who also attended the dinner, asked the clerics to support the government in maintaining writ of the state. He claimed that a balance between faith and international relations was need of the hour.

One of the participants agreed with the minster saying that Pakistan could not afford to fight France, European Union or the entire world. “Sheikh Sahab asked Ulema to play a supportive role as the matter relates to religious circles,” the cleric said.

The mainstream clerics of Barelvi, Shia, Deobandi and Ahle Hadith present at the iftar assured the ministers that they would not participate in any protest drive led by TLP.

Newspaper: Dawn, The News, The Nation, The Express Tribune