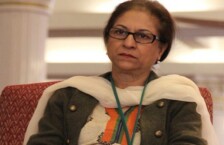 In 1987, she co-founded the Human Rights Commission of Pakistan and became its Secretary General until 1993 when she was elevated as the commission’s chairperson. She spent her career defending women’s rights, rights of religious minorities and children in Pakistan.

She also received the 2014 Right Livelihood Award and the 2010 Freedom Award from the International Rescue Committee. She was known for her outspoken nature and unrelenting pursuit of human rights and remaining undaunted in the face of extreme pressure and opposition.

Jahangir breathed her last on February 11, 2018, in Lahore at the age of 66 due to cardiac arrest