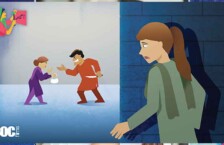 Sharmeen Obaid-Chinoy is known for creating socially relevant content with the purpose of raising awareness among the public, particularly women and children. One of her recent efforts is an awareness series called Aagahi, a public service campaign that was released with the aim to educate women on their legal rights in Pakistan. The good news, it has made it to the 66th Cannes Lions International Festival of Creativity where it has been nominated under the ‘Sustainable Development Goals Lions in the Gender Equality’ category.

Aagahi is the first Pakistani awareness series to be nominated at such a prestigious forum and the winner will be revealed at the Cannes Lions Good Track award ceremony – later today.

Expressing her gratitude on bagging her first Cannes Lions nomination, two time Academy Award winning documentary filmmaker and activist Sharmeen Obaid-Chinoy of SOC Films shared, “Aagahi is a campaign designed to create awareness in women so they are able to navigate the police and judicial system with confidence in Pakistan. The impact created in rural and urban communities through Aagahi has been tremendous and we at SOC Films are delighted to be shortlisted for the Cannes Sustainable Development Goals award.”

The campaign, produced by SOC Films in collaboration with Women Action Forum Karachi, released a series of short animated films in Urdu over the past seven months, highlighting key issues confronting women and ways to counter them. It incorporated issues such as domestic violence and abuse, cyber crimes, inheritance, divorce, etc. and also depicted (in one of the shorts) how to file an FIR, if need be. Aamina Sheikh, who has lately been associated with some social work, lent her voice to the animated shorts.

Coming back to Cannes Lions, over 30,000 pieces of creative and effective work from 89 countries, in 27 distinct creative disciplines, will be awarded and celebrated at the festival, setting the global benchmark for creativity and effectiveness. More than 400 jury members, from over 50 countries, have now convened in Cannes to judge the work, which will be celebrated across five evening Awards Shows.