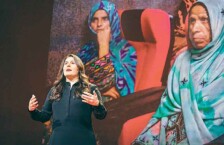 Two-time Oscar winning documentary filmmaker, Sharmeen Obaid-Chinoy was one of the speakers at the TED2019 conference that was held in April in Vancouver, Canada. The theme for this year was ‘Technology, Entertainment and Design (TED) was ‘Bigger than Us’.

Filmmaker and TED Fellow Sharmeen Obaid-Chinoy took the stage and discussed how films have the power to change the way we think about ourselves and our culture.

In a stirring talk at TED, Sharmeen shared how she took her Oscar-winning film on the road in a mobile cinema, visiting small towns and villages across Pakistan and shifting the dynamics between women, men and society, one screening at a time.

The filmmaker started off by saying, “I am a storyteller but I am also a trouble maker. I have a habit of asking difficult questions.”

According to Sharmeen, at the age of 17, she was an undercover investigative journalist. “I don’t even think my editor knew just how young I was when I sent in a story that named and shamed some very powerful people,” she said, adding that the men she‘d written about wanted to teach her a lesson and spray-painted her name and family’s name with unspeakable profanities around the neighbourhood.

Sharmeen further said that after the incident “my father stood in front of me and said, ‘if you speak the truth I will stand with you and so will the world’.”

She spoke about how she felt that something visual would be more effective. “At the age of 21, I became a documentary filmmaker, turning my camera onto marginalised communities on the front lines in war zones, eventually returning home to Pakistan, where I wanted to document violence against women.”

She continued, “My barometer of anger led me, in 2014, to honour killings… I always wanted to tell that story from the perspective of a survivor. But women do not live to tell their tales and instead end up in unmarked graves. So one morning, I read that a young woman had miraculously survived after being shot in the face by her father and uncle because she chose to marry a man out of her free will, I knew I had found my storyteller.”

Sharmeen narrated the story of Saba, who was determined to send her father and uncle to jail, but she was pressured to forgive them. And eventually, on the final day in court, she gave a statement forgiving them.

“You see there was a loophole in the law that allowed for victims to forgive perpetrators, enabling them to avoid jail time,” she said.

“As filmmakers, we were devastated, because this was not the film that we had set out to make…And we began to think about using our film to change the way people perceived honour killings, to impact the loophole in the law. And then our film was nominated for an Academy Award and honour killings became headline news,” added Sharmeen.

The documentarian told the audience that the then Prime Minister while sending his congratulations offered to host the first screening of the film at his office. “At the screening, which was carried live on national television, he [prime minister] said something that reverberated throughout the country: “There is no honour in honour killings.”

Sharmeen Obaid spoke about her film, Saving Face, winning the Academy Award in LA and after accepting the award, she said that the prime minister of Pakistan had pledged to change the law.

“Back home, the Oscar win dominated headline news, and more people joined the fray, asking for the loophole in the law to be closed. Then in October 2016, after months of campaigning, the loophole was indeed closed. And now men who kill women in the name of honour receive life imprisonment. Yet the very next day, a woman was killed in the name of honour, and then another and another. We had impacted legislation but that wasn’t enough,” asserted Sharmeen adding that they needed to take the film and its message to the heartland, to small towns and villages across the country.

She furthered, “We outfitted it with a large screen that would light up the night sky, and we called it Dekh Magar Pyar Se (Look But With Love). We knew we could attract men and children in the mobile cinema. But what about women?”

“We built a cinema inside the cinema, outfitting it with seats and a screen where women could go inside and watch without fearing or being embarrassed or harassment.”

Sharmeen went on to say that they were surprised that they were welcomed in so many places that they went to. “We are documenting what we are doing. We talk to people. We adapt. We change the line-up of films.”