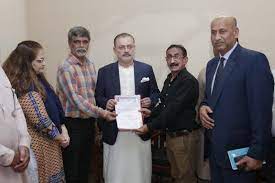 KARACHI – Sindh Minister for Information and Transport, Sharjeel Inam Memon on Wednesday, handed over a cheque for a grant of Rs.5 million to Karachi Union of Journalists.
According to a press release issued here Sharjeel Inam Memon handed over the cheque as grant in aid to President Karachi Union of Journalists Ijaz Ahmed and General Secretary Aajez Jamali as Director Information Saleem Khan and Rahib Gaho were also present on the occasion.
He said that the government attached top priority to the welfare of journalists and providing annual grants in aid to various press clubs and journalists’ organizations to resolve issues of their members…
KUJ office bearers expressed gratitude to Sindh government and announced that the grant would be utilized for new health insurance cards for KUJ members.