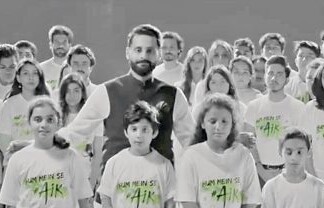 While extensive campaigns for PML-N, PPP and PTI are running on television these days, the show of support for Jibran Nasir can be seen in his recently released campaign anthem. With vocals by Natasha Beyg and Arieb Azhar, the song is called ‘Hum Mein Se Aik’ and the video features not just the singers, but several celebrities, as well as people from all walks of life across demographics and Jibran Nasir, who joins them towards the end of the anthem.

The lyrics of the anthem invoke a sense of responsibility and ownership for one’s actions. Also, it hints that we all are ‘one’ and our issues are similar; hence we need to come together and fight against the system and work towards the betterment of the nation.

As for the rest of it, Imran Khan has some support in the entertainment industry with Farhan Saeed having sung his campaign anthem ‘Ab Sirf Imran Khan’. Taking to Twitter, Imran Khan said about Saeed’s song, “Our youth have been central to our Movement for Justice and they have set the trend for our Party anthems. Proud of @farhan_saeed for this composition for our Movement for Justice. Election 2018: PTI is an idea whose time has come.”

Khan also has the support of Hamza Ali Abbasi, Mawra and Urwa Hocane, as well as Salman Ahmed who has returned to the fold after distancing himself from the cricketer-turned-politician earlier this year while singer Abrar ul Haq is a PTI candidate.