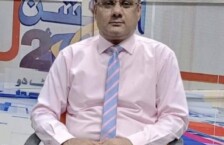 ISLAMABAD: Senior journalist and TV anchor Arshad Waheed Chaudhary passed away on Saturday due to Covid-19.

According to sources in the family and friends, Mr Chaudhry had been diagnosed with Covid-19 two weeks ago and was admitted to Holy Family Hospital in Rawalpindi. The doctors had put him on a ventilator after his condition deteriorated last week. He had been associated with Geo TV for the past 15 years and was hosting the show “Geo Parliament.”

Besides, he was also regularly writing columns for daily Jang. He was also the senior vice-president of the National Press Club Islamabad, and was an active member of the Parliamentary Reporters Association.

Arshad Waheed Chaudhry was in his late 40s and has left behind a widow, three minor sons and his parents to mourn his death.

The Pakistan Federal Union of Journalists (PFUJ) condoled his death and termed it a great loss for the journalist community.