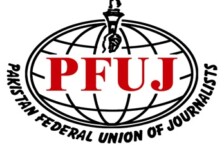 ISLAMABAD: The Pakistan Federal Union of Journalists (PFUJ) has decided to launch the second phase of “Save the Journalist Movement” from Sunday (today) to mark the Press Freedom Day.

A sit-in would be staged outside Parliament House in Islamabad on Sunday, announced the leadership of the PFUJ and the Rawalpindi Islama­bad Union of Journalists (RIUJ) in a statement. They said that sit-ins would continue till their demands were met.

They said that “unannounced censorship” and “use of advertisements as a weapon against freedom of the press” should be stopped.

They called for withdrawal of the recently introduced centralised media policy as it was in conflict with the Pakistan Tehreek-i-Insaf manifesto and press freedom.

They emphasised the need for regional newspapers to save thousands of journalists and media workers from becoming unemployed.

They said that the media industry was on the brink of collapse even before the coronavirus crisis due to the government’s failure to pay dues of billions of rupees of TV channels and newspapers. “Now owners of TV channels and newspapers have started resorting to sacking journalists and workers and pay cuts and several media houses have not paid salaries to employees for 10 months. So immediate payments should be made to media houses and these payments should be made conditional on payment of salaries to journalists and media workers.”