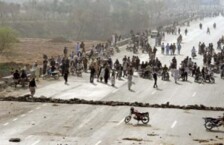 ISLAMABAD: In an almost unprecedented development, the electronic media on Monday gave limited coverage to the news of Mumtaz Qadri’s execution and its aftermath.

Despite being bitterly criticised for their penchant for sensationalism, private TV channels’ coverage of the reaction to the execution was surprisingly low-key.

As the day began, most news channels began to air footage of protesters blocking roads at Faizabad, and sporadic demonstrations in parts of Lahore, Peshawar and other cities.

Due to road blocks, vans taking children to school turned back or did not show up to pick up students on Monday morning. This news item was flashed on TV screens around 7am.

But as the clock struck 9am, coverage of the protests began to fizzle out, so much so that the story dropped to third and fourth in several channels’ headlines. By contrast, footage shown on various channels around this time indicated that the number of protesters at demonstrations against the execution was increasing.

Analysts, however, lauded what they called the government’s ‘clever strategy’.

“Real-time coverage of these protests could have been counter-productive, as people usually come out to watch the protests or join in when they are being broadcast live on TV. This gives us the impression that the numbers have swelled,” said Amir Rana, Director of the Pakistan Institute of Peace Studies (PIPS).

“The way the entire electronic media abided by the no-coverage policy showed that the request must’ve come from ‘powerful quarters’,” Mr Rana concluded.

Even the senior staffers from various news channels were unsure who may have been instrumental in tempering the otherwise aggressive coverage by the electronic media.

“Of course, the only ‘powerful quarters’ that can ask the media to restrain its coverage is the military,” a senior staff member at popular TV channel commented.

While Inter Services Public Relations (ISPR) did not respond to requests for comment, a military official told Dawn on condition of anonymity that limited coverage of the protests against the hanging of Mumtaz Qadri was mainly due to public support for the National Action Plan.

“This is a clear reflection of responsible behaviour by the electronic media and it is clear the whole nation stands behind the authorities,” the official added.

The Ministry of Information and Broadcasting, however, claimed that the low-key coverage was the result of their best efforts.

“We have a department – the Directorate of Electronic Media (DEM) – and on Monday, we started working even before office hours began. Within a few hours, we were able to control the content of news broadcast by requesting channels to keep their screens calm,” Information Secretary Imran Gardezi told a sub-committee of the Senate on Monday.

Similar claims were made by the Pakistan Electronic Media Regulatory Authority (Pemra), whose chairman claimed they had floated warnings and guidelines via their official Twitter account.

However, media felt the protesters backlash as enraged protesters damaged a private news channel’s DSNG van and beat up some mediapersons while raising slogans against the press. 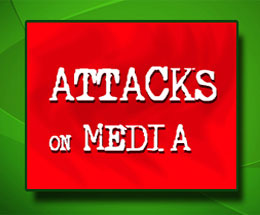