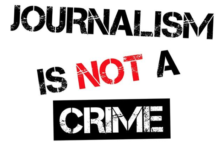 The Pakistan Press Foundation (PPF) is concerned over the registration of terrorism of cases against journalists as an alarming misuse of authority and works as a tool to intimidate the media thus limiting the space for free expression, objective reporting and holding power to account. On March 15, police registered a case against protestors and journalists.

Activists, civil society members, individuals associated with certain political parties and others had staged a protest in front of the office of the Additional Inspector General of Police in Sukkur.  The protest was held against the killing of a Sindh University student, Irfan Jatoi, in an alleged police encounter.  Journalists claim they were covering the protest for their media organisations.

Speaking to PPF Mr. Sahil Jogi said he and his fellow journalists were there to cover the protest and police filed an FIR (criminal complaint) against them alleging that they had chanted anti-state slogans.

Another nominated journalist in FIR Mr. Imdad Phulphoto told PPF he had provided information about the case with his employer Abb Tak TV.  He said he was just covering the protest and did not know why police had added his name to the criminal complaint.

The Pakistan Federal Union of Journalists (PFUJ) expressed concern over this development and said that this was “unprecedented and uncalled for.”

In an editorial by Dawn, it was stated that according to activists up to fifty media personnel are facing terrorist cases in Sindh.

PPF urges the Sindh government to investigate the matter and ensure journalists are not made the subject of cases for merely doing their job.

PPF said that such incidents once again highlight the importance of passing the Protection of Journalists and Media Professionals Bill both at the provincial level in Sindh and at the federal level to ensure accountability and to provide the media with legal protection.