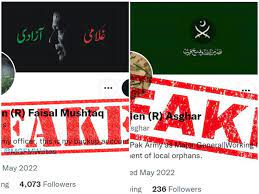 The accounts are being run by a political party and are involved in promoting a particular narrative.

The sources reveal that the accounts give an impression that a particular party is being supported within the army.

The PTA has blocked both accounts and legal action is being taken against those running them.

Last month, Federal Minister for Information and Broadcasting Marriyum Aurangzeb had said that amendments would be made in the Pakistan Electronic Media Regulatory Authority (Pemra) laws to curb fake news.

The decision was made during a meeting of the information minister with a delegation of the media’s Joint Action Committee (JAC). The forum reached a consensus that fake news damages national security interests and societal cohesion.

“Prime Minister Shehbaz Sharif will not compromise on the freedom of expression,” she said. “The prime minister wants to promote this constitutional and civil right as death of journalism is the death of politics and democracy.”

She said, “For four years, the people, politics and journalism have been derailed. During this time, attempts were made to snatch the ‘freedom of the nation’.”

The information minister added that “black laws” such as the Peca Ordinance and Pakistan Media Development Authority (PMDA) conspired to enslave 220 million people.

“The media was financially destroyed in four years like the country’s economy,” she lamented. “Journalists are aware of the economic catastrophe. They want to repair the damage done to them as soon as possible.”