PPP distances itself from smear campaign against Dawn -
ISSN 2226-7492

PPP distances itself from smear campaign against Dawn 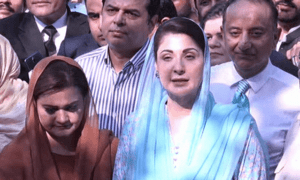 HYDERABAD: The Hyderabad district chapter of the Pakistan People’s Party has distanced itself from the People’s Party Medical Union, which had organised a procession a day before against Dawn’s coverage of Liaquat University Hospital’s (LUH) affairs.

In a joint statement issued here on Thursday PPP Hyderabad district’s president Saghir Qureshi, general secretary Ali Mohammad Sahito and information secretary Ehsan Abro condemned the smear campaign launched against the newspaper and its Hyderabad reporter and said that PPP had always stood for freedom of the press and challenged dictators.

They said that PPP had nothing to do with the procession organised by the so-called Sindh People’s Paramedical Union in LUH on Wednesday.

The participants in the protest had strongly criticised Dawn’s coverage of LUH’s affairs, they said.

They said the party had no such wing as no notification had been issued in this regard, hence the existing unit in LUH was illegal.

The party leaders said that PPP Sindh chapter president Nisar Ahmed Khuhro had been informed about the campaign against Dawn, and warned if any office-bearer of the party or its wing was found part of the campaign he would face action.