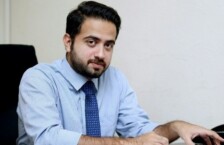 Pakistan Press Foundation (PPF) is concerned by the raid at the home of the former focal person on digital of the outgoing ruling party, Dr Arslan Khalid. It is a worrying continuation of a trend used to silence journalists, bloggers, and social media activists in Pakistan by creating an atmosphere of fear, ‘red lines’ and threats.

The outgoing ruling party, Pakistan Tehreek-i-Insaf (PTI) party, said Khalid’s home was raided on April 10 in Lahore, the capital city of the Punjab province. .  “He has never abused anyone on social media and never attacked any institutions,” the tweet read. The party urged the Federal Investigation Agency to look into the matter.

Azhar Mashwani, former focal person for digital media of the provincial government of Punjab, said that Khalid’s house in Lahore was raided by 11 unidentified men and that said the phones and laptops of all family members were taken and his family members, including his 80-year-old mother, were threatened.  Mashwani added that Khalid was “continuously receiving threats in the past four weeks from the people who didn’t like the online feedback coming from [the] masses”.

PTI leader Shahbaz Gill said they were expecting “they” would do this, without naming who, and therefore the night prior, Gill had spoken to Khalid and sent him from his house to another place. Gill added that the laptops and phones that had been taken contained nothing but professional work on them.The raid at Khalid’s house was condemned by party leadership. Former Information Minister Fawad Chaudhry said that the entire PTI party was standing with Khalid.