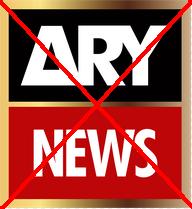 Pakistan Press Foundation (PPF) condemns the steps taken by authorities against ARY News channel in recent days including disruption in broadcast, issuance of a show-cause notice and case registrations as well as the arrests of ARY journalists and staff. These steps are pressure tactics to target and intimidate a media network and are severe attacks on press freedom.

This arrests, broadcast disruptions and registration of criminal cases is a dangerous strategy used to instill fear in the media, censor them and strangle them financially.

We urge authorities to ensure that press freedom as guaranteed in Article 19 of the Constitution of Pakistan. It is the responsibility of the state to ensure that the media is allowed to freely exercise their right to free speech without fear or intimidation.

On August 9, reports of the removal of ARY News from broadcast were shared. The network said that the channel had been removed on the instructions of the Pakistan Electronic Media Regulatory Authority (PEMRA) to cable operators.

As per the channel, transmission was suspended in Karachi, Lahore, Islamabad, Sialkot, Hyderabad, Faisalabad as well as other cities, additionally in areas of Rawalpindi, the location of the channel had been changed, and continues to be disrupted in a number of cities.

Taking the channel off air is an undemocratic step and is a tactic used in the past to silence other television networks such as Geo News, the removal of broadcast of any channel works as a tool of censorship. This further creates an environment of red lines and over time creates financial difficulties for the network.

It is a dangerous repeat of past steps taken by authorities against different media organisations, and we urge the relevant authorities that ARY News bereturned to air across the country without any disruptions in broadcast.

The Pakistan Federal Union of Journalists (PFUJ) condemned the suspension in broadcast and urged the PEMRA to restore the channel. PFUJ President Afzal Butt said that nationwide protests would be held if it wasn’t restored within 24 hours.

On August 8,  PEMRA issued a show-cause notice to the network for “airing false, hateful and seditious content”.

According to the show-cause notice,a guest during a segment, Pakistan Tehreek-i-Insaf (PTI) leader Dr Shahbaz Gill had “uttered highly hateful and seditious comments which tantamount to incite ranks and files of armed forces towards revolt”.

The notice added that “tried to malign [the] federal government” with his remarks by “alleging government functionaries to run a campaign through social media cell against his party chairman Mr Imran Khan for propagating anti-Army narrative.”

PEMRA stated that the statement of the guest was in violation of Article 19 of the Constitution as well as PEMRA laws.

The PTI leader, Gill, was arrested on August 9 in Islamabad. The police have been granted two day physical remand of the leader.

ARY has distanced itself from the statements made by Gill. In a statement, they said “comments or opinions of any individual televised by the network do not represent the channel’s policy. Shahbaz Gill’s statement was his personal opinion not ARY’s editorial policy.”

In further developments, on the night of August 9, the head of ARY News, Ammad Yousaf, was arrested in Karachi, Dawn reported.

According to ARY News, police officers and plain clothed persons “forcibly” entered Yousaf’s house. They diverted the CCTV cameras and jumped in from the top of the house’s main entrance. As per the report, licensed weapons and DVR of the CCTV were also taken.

Additionally, cases were registered against various ARY staff including the Chief Executive Officer (CEO) of the network Salman Iqbal in connection with the same remarks made by Gill, Dawn reported.