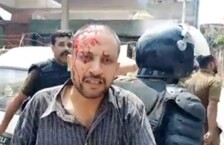 Pakistan Press Foundation (PPF) condemns the actions of police in Rawalpindi during a protest by teachers and clerks in which photojournalist Faisal Khan was injured. The decision of the police to baton-charge protesters resulted in the injury of the journalist, along with ten teachers and clerks.

It is the job of a journalist to cover all developments including protests that take place in the country. It is condemnable that the action of the police resulted in the injury of a member of the media on the job.

On August 4, a protest was held in Rawalpindi to protest the appointment of the chief executive of the district education department, Dawn reported.

Speaking to PPF, Khan, who is associated with Daily Ausaf, said that he had gone to cover the teachers’ protest. When he reached the area, police arrived and started a baton-charge against the teachers and the journalist in an attempt to stop the protest. Khan said that he received minor injuries in the process.

The photojournalist, who was on duty and had been assigned the assignment, went to City Police Station to register a complaint but the police did not do so. However, later in the night he received a call from the station informing him that the police official who had assaulted him had been suspended. They added that they would make sure to avoid such incidents in the future.

The incident was strongly condemned by the Pakistan Federal Union of Journalists who urged Punjab Chief Minister Chaudhry Pervaiz Elahi to take immediate notice of the incident.