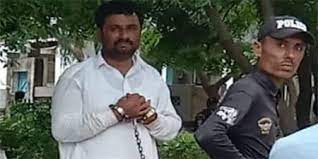 On August 19, Samo was arrested by the Keti Bandar Police Station in Thatta, ostensibly in charges of carrying an illegal weapon.

However, speaking to PPF, Ilyas Samoo’s brother Latafullah Samoo said that due to Ilyas’s reporting on rain affected areas, the police filed a first information report (FIR) against him.

Awami Awaz Editor Iqbal Mallah told PPF that police arrested him due to his reporting on rain affected areas in Thatta and Keti Bandar, Mallah said. He added that five days ago Samoo received a threatening call from an unknown number and received a text that said: “Stop reporting”.

The text also included some details like: “Due to your reporting, my political career is in danger if you will not stop the reporting you will be arrested’.

Thatta Press Club President Iqbal Jhakro told PPF that Ilyas is paying for reporting about the local issues. “Feudals of the area were not happy with his reporting. He is patriotic and a dedicated journalist,” Jhakro added.

Journalists held a protest on August 21 for the release of Ilyas. A committee of Thatta Press Club also met with SSP Thatta and shared the details.

Ilyas was to be presented in the additional judge court Thatta on August 22.

Mudassir Ghafoor, a member of Karachi Union of Journalists (KUJ)’s executive committee told PPF that Samoo was reporting on the flood disaster from his area. Police filed an FIR in reaction to his reporting. He is currently in police remand.

The Council of Pakistani Newspaper Editors (CPNE) has also condemned the incident and called for the immediate release of Samoo.