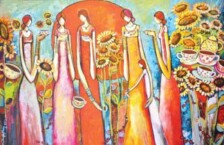 Artists’ depiction of human form in their work has always played a vital role in understanding the complex nature of psychology associated with social behaviour. Although its visual representation has been changing over the years, the underlying message remains consistent.

In a similar context, it is very rare to see family affection ooze so profusely, as it does from the paintings of Shazly Khan, exhibited recently at the Full Circle Gallery, Karachi. The collection of 32 acrylic-on-canvas paintings curated by Guddo Haider and Scheherezad Junejo, titled The Epic Journey, boldly emphasise the key role of a woman, particularly in a family environment; as a mother, relation or a friend.

The artist believes in pushing the limits of visual representation to voice her opinion and resorts to the use of generously hyperbolised anatomy. It is the courage of her convictions that accentuates her pristine concepts with every stroke that she puts on the canvas.

The paintings of Shazly receive their vibrant hues from the universally reliable acrylics which are infinitely diverse in tints, easy to handle and quick-drying. She applies the pigment liberally but objectively, with almost any tool; be it brush, palette knife or bare hands. As long as she gets what she ventures out to do, she is quite content.

According to her, it is the feel of the paint that gives her the stimulus to create amazing compositions to a point where she feels quenched. The eventual outcome thus has the ability to empathise effortlessly with the viewers to give the paintings their distinguished characteristic.

She has an uncanny obsession to unravel the mysteries of ordinary, everyday behaviour that emerge from trivial relationships and the rudiments of social conduct. She believes that it is the embedded information in the subconscious that surfaces time and again and needs to be realised and harnessed to cherish a more peaceful existence. Her work depicts the amorous sensitivities that exist in family bonds and in a way that touches the viewers — almost as if the paintings are narrating the audiences’ experiences with their kith and kin!

In her painting ‘Life is a bed of roses’, Shazly has skilfully elaborated the true pleasures of life that dwell in the nascent relationships that are nurtured over a period of time. The artist depicts a reclining woman basking under the sun, on a bed of flowers that have sprouted from seeds that represent people in domestic postures. With a harmonised treatment of colours, the artist conveys that the deep attachment with relatives and friends becomes a vital part of life which rejuvenates confidence and confers perpetual hope.

Another painting, titled ‘My kitchen table’, sends immediate signals of closeness, affection and warm intimacy that prevail within every household. The two urbanised women in her customary supple style of distortion, drinking tea at the kitchen table, reflect a cosy union of members of the house. The artist has chosen this spot for its quality of bringing the family frequently together which fortifies their sense of belonging and enhances mutual love. Owing to the distortion, the treatment of drawing by the artist results in a fair visual balance because of the significant simplification of forms and intelligent use of colour and texture.

The artist has an inherent passion for figurative expression which she constantly experiments through innovative drawing that borders with the surreal. Bearing a vivid foresight and a perceptive mind, Shazly composes and paints with sincere audacity.

Spontaneity is obvious from the visual fluidity of the paintings which speak of the artist’s sagacity with which she deals with large and elongated figures that spread out across the canvas.

While there are signs of influence from the flamboyant drapery patterns of Gustav Klimt, sensational shapes of Ahmed Parvez and the figurative contortions of Sadequain, the artist is developing an exclusive style of her own which is beginning to acquire a signature characteristic.

Creativity at its best 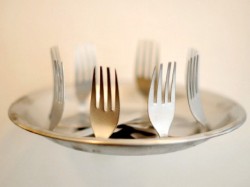 Artists display works inspired by their life in the city 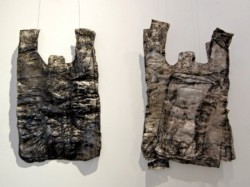 Artists with different styles find common ground in their work