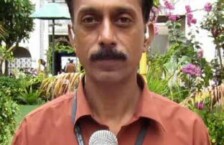 Dahar was shot dead near Badah Press Club on New Year’s Eve. He had been standing at a medical store near the press club when the incident occurred. He was rushed to the CMCH where he succumbed to his injuries.

The journalist faculty of Badah and Larkana claimed that Dahar’s life could have been saved if the doctors had acted promptly. They added that he died due to excessive bleeding, a fact that was confirmed by the postmortem report.

Meanwhile, the police have detained the owner of the medical owner over suspicions of his involvement in the incident. Larkana DIG has constituted a five-member committee, headed by ASP Sajid Khokhar, to probe the matter and submit a report within three days. The CMCH medical superintendent, Dr Saifullah Abbasi, told The Express Tribune that a three-member committee had been formed to investigate the allegations regarding negligence on the part of the doctors.

The incident has sparked anger among the journalist fraternity who wore black armbands as a token of protest. Badah Press Club general secretary Iqbal Channa claimed that Dahar’s death was not accidental – rather, it was a targeted attack.

Meanwhile, scores of journalists staged a protest outside the Karachi Press Club (KPC) on Thursday. They demanded the government to immediately arrest the culprits and ensure safety and security to media persons. The demonstration was organised by the KPC, Karachi Union of Journalists and Pakistan Federal Union of Journalists.

An FIR was registered against unknown assailants by the brother-in-law of the deceased, Riaz Hussain Khushk, at Badah Police Station on Thursday.