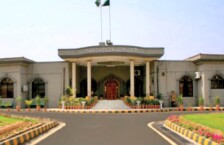 Justice Farooq remarked that freedom of expression is not unlimited adding the court would not issue directives against an individual rather it would order the department concerned to prepare a policy on such acts. He directed the director general of internet protocol to personally appear before the court. The bench again served notices on the interior, law and defense ministries and PTM activists, including Manzoor Pashteen, Ali Wazir and Mohsin Dawar, seeking their replies on June 13 and adjourned the hearing.

The petition seeking ban on the PTM chairperson and others has requested the court for an “appropriate action” against Manzoor Pashteen, MNAs Dawar and Wazir under the prevailing laws in the interest of country and to uphold the respect and prestige of the Pakistan Army. The PTM is not a registered political party, it added and requested that a print and social media ban be placed on the PTM activities. The petition further states that the Pemra is not implementing its code of conduct.