LAHORE: Scores of activists of Lahore Bachao Tehreek organised an awareness drive on Thursday to discourage use of plastic bags.

“We launched the campaign to educate the general public,” said Ali Amjad, a representative of the Tehreek. “We will focus on businesses and later the legal system as the campaign progresses.”

He said businesses were instrumental in supply of plastic bags. “They will be urged to shift to cotton bags,” he said.

The LBT activists gathered in front of Jalal Sons at Gulberg’s Main Market and handed out pamphlets. Amjad said the store was frequented by thousands of people.

“We decided to approach the public first because businesses can be hostile to change,” he said.

“We approached Pot Pourri earlier to discuss the initiative with them.

They were not open to the idea,” he said.

Amjad added that they had also studied business models that provided customers alternatives to plastic bags.

“If the customer demands plastic bags, businesses will have to change their practices,” said Naeem Bajwa, an LBT member.

He said approaching customers first was important. “Public should be informed on the hazards of their use,” he said. Muhammad Ali, a 25-year-old software engineer, said, “Carrying fresh edibles in plastic bags is a health hazard.”

“One never seriously thinks about how often we use plastic bags,” he said.

The Jalal Sons administration soon told the campaigners to leave their property.

Awais, a representative of Jalal Sons, said they reserved the right to tell anybody to leave. The Lahore Bachao Tehreek plans to take the campaign to other stores and shopping areas. “We are studying peak business hours at various locations We will hold our campaign there within that time,” Amjad said. He said they would look to ban plastic bags through legislation.

According to the Pakistan Environment Protection Agency’s website the Punjab Environmental Protection Department imposed a ban on black plastic bags in 1995. It also mentions a prime minister’s directive in 1997 against use of all types of polythene bags. 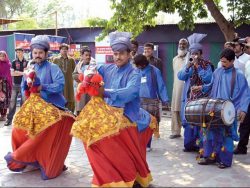 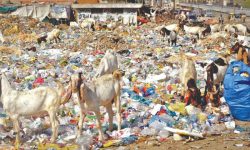