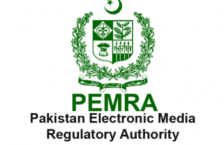 “During the monitoring of satellite TV channels for the last few days, a trend has been observed wherein News and Current Affairs Satellite TV channels have been found airing live footages, media conferences and media talks of different politicians, analysts and legal fraternity containing aspersions against the honourable judiciary, while referring to Diamer-

Bhasha Dam Fund, without any editorial control,” a statement issued by Pemra said.

The authority noted that it was also observed that news channels in their current affairs programmes/ talk shows were repeatedly broadcasting derogatory remarks and comments against the superior judiciary.

“It is pertinent to mention here that the authority from time to time has advised News & Current Affairs Satellite TV channel licensees to refrain from airing any content which is in violation of Electronic Media (Programmes and Advertisements) Code of Conduct, 2015.

Dawn: TV channels told not to criticise judiciary over dams